News brings us the unusual instead of the ordinary, and nothing could be more true than with Iraq.

There would be no daily body counts in a war (if you can call it that) if the numbers were significant. It’s common sense when you really think about it, and it applies to anything. For example, a murder or other crime would likely never make the news UNLESS the crime rate wasn’t relatively low. If you live in a town with a detailed police blotter in the local paper, you’ve got a pretty damn fine quality of life. Start worrying when they DON’T count bodies here or in Iraq.

An email sent to me recently made me think of all this. Protests and insurgency wouldn’t be covered if they were going on all the time all over the place. Negative sentiments all over the news reveal an opposite truth, one that you find when you read real people’s blogs who are there and look at all the more general information.

The constant bad news from Iraq blurs the most amazingly ethically planned military campaign ever, coupled with a reconstruction effort unparalleded in history for an overwhelmingly grateful people. But it is marred by terrorists who play on the miniscule minority of anti-American sentiment that will never change because of inbred extremism. And that makes the news. New schools, improved hospitals, the elimination of fear of their own government and open arms for our troops will not.

To make a comparison, it would be like focusing on all the school shootings in America. You may never EVER seen one or even know anybody involved in one in your entire lifetime, but the rest of the world would think it’s business as usual and representative of our culture. Heck, some of us think it is, which only shows we have no perspective at all. We just don’t get it. Which is why we hate America, and the Iraqi people do not.

I added captions one would more likely expect from the news. But these are truly “from the field” and speak better for themselves — enjoy. 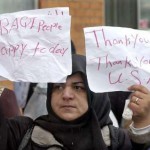 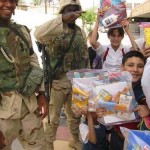 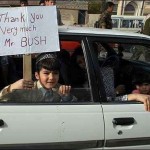 It is clear who the Iraqi people blame for all of this. 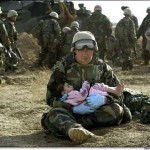 The soldiers are the unfortunate instruments of a heartlessly political foreign policy. 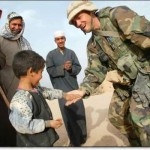 The Iraqis live in more fear and oppression than before. 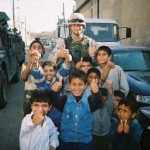 They have a puppet government, where only those chosen by America are on our side. 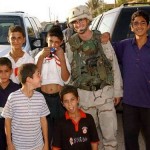 In the end, we will all pay, as our foreign policy breeds a new generation of terrorists.