Why YOU Will Throw Away Your Vote on Tuesday

The short answer: Your vote doesn’t count because too many people have already resigned themselves to vote against  their conscience because they believe only evil choices are “electable”. 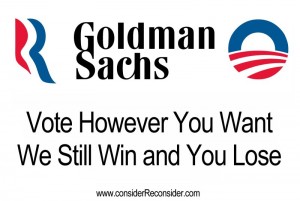 I actually ordered this image printed as a lawn sign I will be sticking in my front yard this weekend, and at the local polling place on Tuesday. Feel free to redistribute for personal use.

And yet the term “throwing away your vote” is used predominantly for those of us who vote for a third party under such an assumption they can never win, or in fact will tilt the apple cart in favor of the greater of two evils (whoever they suppose that is).  And to the fanatic obsessed with such a person losing, we are the ones complicit in some crime, not they who actively support a “lesser evil”, which I may point out is still “evil”.

Never mind the real numbers {sarcasm}.  I’m not just talking about more and more third-party wins on State and local levels, but Governors and Congressman.  And if Social Media is any indicator, fewer people than ever believe there’s much of a difference between Democans and Republicrats.  But that’s not the case with the presidency, you say?  Here’s a quote from the OTHER debate you probably didn’t hear about, the one hosted by Larry King, and Romnama nor Obamney didn’t bother to show up for.  [[Green Party]] candidate [[Jill Stein]]:

{Special thanks to the blog “MMWords” for providing the first transcript I could find of even part of the debate.}

Let’s be pessimists with all chips in and assume it is not at all possible to dislodge the partisan “dualocracy” — that only one or the other candidates can ever win.  Is our moral obligation to vote for the lesser of two evils according to our conscience to minimize the negative impact?  Can we say we had a moral imperative and not be held accountable for supporting a corrupt system by voting at all?

First it assumes it matters if one person gets elected over the other, a more and more questionable position given the common special interests and similar major policies.  We are simply hoping that one candidate is less likely to infringe whatever rights are more important to us personally, or do less harm to those aspects of society (defense, civil rights, economy, etc.) we believe should take precedence.

Secondly, it assumes — and here is what I consider the heart of the matter — the end justifies the means.  What of those who take a stand and vote against both parties, or even abstain as a gesture of defiance in a state that does not (yet) require everyone to vote under penalty of law?  From this point of view they are the guilty ones because by their act (or omission  may have resulted in worse consequences than if they had voted for, again, the “lesser of two evils”.

All opinions on likelihoods aside, the fact remains that all of us eligible voters can, in fact, not vote for candidates based on who is likely to win.  Taking the long term view, those who look only to the short-term ends perpetuate the system; those who stand against both evils have at least some chance.  The statistics of both independent votes cast at various levels of government, and the growing number of people who do not affiliate with either party but are politically active,  suggests this is true.

Larry King described the other-party candidates with an expression I have used may a time in my own life — “tilting at windmills”.  The thing is, windmills don’t last forever.  Change is inevitable, slowed only by complacency and conformity.  And the worst submission of all is to our own beliefs that we must do something according to the current paradigm, doing a small evil to prevent a greater one.  And those chains are the hardest to break.

Who will sleep more soundly at night?  The one who washed their hands of a bad choice because it could have been worse?  Or the one who will not yield, knowing things will get worse either way and at least hope their defiance will be remembered, inspiring meaningful change in the elections of tomorrow?  The former ridicules the Quixotic voter for what they insist will not make a difference; the latter knows the former is the reason they have an uphill battle in the first place.

I think you can tell where I stand.  I know that the only thing stopping a revolution in the democratic process is the self-imposed illusion there aren’t enough of us to demand a third choice.  The reason we fail is because too many of us are afraid of “wasting our vote”, not realizing that even a doubling of the single-digit-percent of independent-marked ballots would shake the very foundations of the DNC and GOP with fear.  And the perception that we have a better choice would snowball into a demonstrable statistical reality, not merely for the occasional congressman, but even the presidency.

And so Governor and [[Libertarian Party]] candidate [[Gary Johnson]] pleads, as I do, “Wasting your vote is voting for somebody that you don’t believe in.  That’s wasting your vote.”