Why “Gun on Gun” Statistics Are a Lie 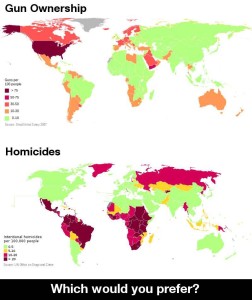 I came across an article from the “truthout” website clearly showing that where gun laws were weak there were more gun-related deaths.  Why would that be?  I dunno, maybe BECAUSE THERE ARE MORE GUNS?  That is like saying more people die of illness in hospitals than at home, so if we restrict access to hospitals, there will be less deaths in hospitals.  And that would be true.

Beware of any statistics about guns and crime that only focus on GUN crime.  The fact is that the presence of guns means more gun-related deaths, but far less overall crime and deaths.  This is true not only geographically, but historically, where places that ban guns have jumps in crime and places that encourage carry have huge drops.  We may fight the notion of causation either way, but the correlation is the opposite of what such misleading statistics tell us.

It’s a nit-picking lie at best.

I personally would rather have less crime and deaths than worry about what weapon is used in its commission.