Neither Free Nor Safe: The Risk and Cost of Flying

The current attention in American Politics is on the new airport screening policies of the TSA, a branch of the Department of Homeland Security.  We have passed far beyond the question of how much shampoo will sound the alarm or if fancy toenail clippers will end up a Christmas present for a screener’s wife.  In the premise of some amorphous, imminent threat and the logic that a plotter would somehow be dumb enough to only use methods detectable by the publicly-known procedures of any given time, we have placed grandmothers, frequent fliers, and even pilots under literally more scrutiny than those visiting face-to-face at a medium-security prison. 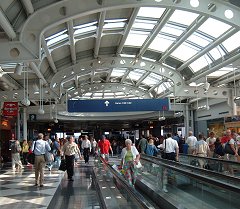 The average facebook philosopher tells us how we are necessarily pressed to decide a balance between safety and liberty. What is forgotten is that just as there is no absolute freedom, there can be no absolute safety. And if we agree we ought to purchase some of one with the concession of the other, the real question is if we are getting our money’s worth (figuratively and literally). But does being less free in some manner always result in a commensurate (or any) increase in safety?

Before we look further at what is before us, let’s taste the irony.  We who swallowed the Patriot Act without concern are now grabbing the baton of protest and outcry from those who first pulled what we thought was a false alarm on the violation of personal rights.  Maybe we only protest injustice under a president we don’t like and have to wait our turn.  But with shoe on the other foot, those who support the new measures are often the same people who reject the Arizona state of affairs.  Some of us are so offended by professional, trained law enforcement  asking for ID, comparing it to the colloquial Nazi meme “Ver are your papers!”  Frankly, if given the choice, I’d rather just give them my papers.

Think about it.  It is now a requirement to have your genitals viewed or felt — your choice — to fly on a commercial airplane.  Seriously.  Deciding between federalized child pornography and what in other circumstances would be considered molestation, can any good parent LET their children fly?

Those are the two choices outside of being denied your flight and being detained and/or fined.  As a society there are a different set of two choices for screening airline passengers — what the TSA is currently doing at high cost to country and person, or what makes sense and actually works.

When I go over the border to Canada — the longest standing unfortified border in history as a matter of fact — they ask questions and determine using proven methods and profiles who is harmless and who is worth delaying commerce and the free movement of global citizens.

Before 9-11, airline security was always amazingly effective.  Literally billions of airline passengers graced the skies anonymously or incognito in the 20th Century with infinitesimal bad consequence.  Only in my lifetime was identification required to board a plane and tickets didn’t have names on them. It had a proven track record, with this or that hijacking now and then.  In perspective, it would be like only one in many, many million people getting mugged in their lifetime.

But now we want to replace judgment with technology.  The same mind that admittedly may profile with bias is replaced by a system incapable of human discernment.  And profiling does not have to be wrongfully discriminatory.  The single male from a high-rish country who is buying a one-way ticket with no luggage is more suspicious than a citizen mother and newborn with the expectable carry-on items.  A person wearing ethnic clothing is not a problem, but someone who is looks like they’re trying to fit in too hard might be.  But we don’t care about what makes sense based on reasonable probability.  Instead we hand over an instruction manual to terrorists as to how NOT to get caught by following materials-based guidelines that, like gun control laws, only pertain to law-abiding citizens.

Now forget all that common sense stuff you may not agree with and look at measurable results.

It is more than a suspicion that the swift changes to screening policy were busy work to make us feel safer — “[[security theater]]”.  Let’s be clear — NONE of the measures at security checkpoints in the last nine years would have prevented 9-11.  I personally know more than one person who brough a knife on board (by mistake, of course) undetected.  I can think of plenty of ways to bring onboard all sorts of dangerous items (or their components).  It’s not rocket science. And the hijackers in 2001used box-cutters? Actually they used something no machine could detect — the threat of an imaginary bomb. Try finding THAT amidst a man’s genitals.

But we ARE more safe, no thanks to the TSA.  Any time someone tries to light their shoe on fire, they are tackled — by PASSENGERS.  No more hoping and holding your breath as you fly unwilling to Cuba and get a courtesy flight back.  Many a Joe Citizen will become Captain America when a real situation occurs, and handling a real problem is always better than chasing a completely unknown potential one.  Today, the box cutters would end up in those places security searched, not come from them.

In the meantime, we’re left with countless man-hours of under-trained, tax-supported “administrators” with expensive, potentially harmful equipment supplied by a business client of the former [[Michael Chertoff|Secretary of Homeland Security]]!  And from a woman calling into the local radio talk show recently, to the speech of Congressman Ron Paul on the floor of the House, there is a concern that we’re all being trained to be treated like cattle by a government that society is turning to in search of a care-free complacency of protectedness.

If someone a generation ago would have suggested these measures would be implemented, they would be accused of paranoia, and yet even if there was a long-term conspiracy about it, we will continue to chant the mantra “extraordinary measures in extraordinary times”.  I say we do NOT live in a time of any greater danger.  We live in a time of propagated fear.  If it were otherwise, effective measures would be called for, not ostentatious ones.  And I am not alone.  In a survey by MSNBC, 80.6% “believe they are a burden and safety risk to Americans and ineffectual for catching terrorists.”

The Solution No One Will Accept

With the apathy expected by a system that makes us powerless by fear on one side or its Orwellian cure on the other, it’s no wonder people are “opting out” altogether — not flying.  If nothing changes, it will only be a matter of time before airline bailouts become the joke du jour, or put to a vote on Capitol Hill, whichever comes first.  But not flying does not solve the root of the problem.  A recent Drudge headline, under the image of the TSA at work on its prey, read “The Terrorists Win”.  This makes no sense —  unless, of course, you happily live in a country that was founded on the ideal of personal freedom.  Only then is the contradiction of fighting an enemy by corralling your own people most obvious.

A poll on the Consumerist, asking if people will stop flying

But some of us cannot accept an imperfect world.  We cannot accept that a successful attack should ever be allowed to happen again.  I say we DEAL WITH IT.  No system is perfect and people make mistakes.  Make the distinction between reasonable precaution and hypothetically heroic measures at great expense.

But is human life worth more than inconvenience and embarrassment?  All seeming heartlessness aside, consider the perspective that these measures might not be worth thwarting another 3,000 deaths, even more than twice.  You read correctly.  As Congressman Paul stated, hundreds of thousands die on our thruways and in homicides.  What if we could eliminate almost all of them by searches every time we get into a vehicle?  If someone bombs a bus, will we buy Nakedizers for bus terminals?  This isn’t a slippery slope — we’ve already fallen off it into the absurd.

It is not uncompassionate, but wise to accept there is such a thing as acceptable loss in real life — the big picture.  How many people did we knowingly outright sacrifice at Normandy?  We could have cowered and waited perhaps another thirty years before Aryan Lebensraum reached Manhattan.  My great uncle might still be alive, in his advanced age being only asked where his papers were.  As Americans, we historically choose to assert there is something greater than one’s own life.  And we must ask ourselves if human life isn’t about merely staying alive but having the dignity and privacy of person we used to take for granted.  After all, without this we’re no different from cattle.