Pacifism as a Vice

{This article was originally sent to the Western New York Catholic monthly periodical on 4 February 2003, not published except on a personal forum, where it received hundreds of views. Please note this was written before the War of Iraqi Liberation.*}

A local pastor in a neighboring parish wrote in a message to his congregation, “the President [Bush] will listen to no one about more peaceful ways of negotiation” with regards to the threat of weapons of mass destruction in the hands of the dictator of Iraq. This may or may not go over the line of preaching politics, but the next statement truly concerned me: “… war never solves problems but only creates more.” I will not argue the possibility that peaceful means may or may not be exhausted, but I will argue that such absolute pacifism is an extreme that we should not adopt.. 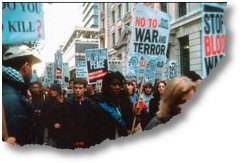 As Catholic Christians, we know the Kingdom of God is at hand, but are also faced with the reality that the “Old World” had not yet passed away. We can choose not to participate in the world of senseless violence, greed, and the abuse of power. But it has been often repeated that the only thing evil needs to succeed is for good to do nothing. Scripture teaches us (in Ecclesiastes) that there is a season for all things, including war. If we do not believe force is ever an option, then why do we have arms at all? Is it a sin to participate in the military or law enforcement?

It seems like yesterday that the leaders of our Church made an international apology for not standing up to Nazi Germany. In acknowledging this sin of omission, we have learned that an unwillingness to fight under any circumstances is a choice to participate in all the evils of fascism, terrorism, and violence. Or have we learned nothing?

The ability of mass violence to occur any time, even in our own cities, does not warrant a wait-and-see attitude toward evil. We needed Pearl Harbor to wake us to WWII (and it was military force that liberated concentration camps, not rallies). We needed September 11th to justify to ourselves the forceful overthrow of the Taliban. I am not saying now is the time to act or not act, and we have elected leaders with far more information that bear the burden of that decision. What is clear is that we are at a crossroads that affords us the opportunity to save countless lives by acting instead of reacting after it’s too late.

As an educated Christian, I am a pacifist. I will turn the other cheek, and you can pluck my beard as well. But can I enable you to do this to my neighbor by walking past you, bloody on the side of the road, and say a prayer or two later? Instead of pretending evil will go away if we stay home and hope for the best, we ought to be actively committed to peace, by works and as peaceful means as necessary, even if it means a war that would liberate a people from oppression and torture, and eliminate an indisputable biochemical threat for all of us. As faith without works is empty, peace without a willingness to fight for it is a poor excuse for true Christian pacifism.

*{For the record, I wont take any flack about not finding “weapons of mass destruction”. It was the repeated conclusion of the UN inspectors and multiple countries’ intelligence that there were unaccounted weapons. Heck, they’re still out there. But time proved my sentiments true in at least one way … the weight of a feared regime has been lifted for millions, and the difficulties in transitioning to self-determination are, in the end, gratefully accepted by the Iraqi people.}