As someone who plans to write a book (or two, or three) someday, I cringe every time I go to a “dollar store” from the very thought that something I may write someday might end up there.  A garage sale is one thing, as you can find treasures now and then, but for a book to be wholesaled off the usual distribution networks, it has to have less than stellar curb appeal. 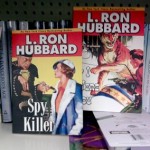 Not titles you may have heard of ...

At one of these bottom-tier discount stores I came across stacks of fiction books by L Ron Hubbard.  Yes, the former leader and founder of Scientology, still a household name in some circles.  Some of the works before my eyes were science fiction; some seemed to be cowboy or adventure stories.  I remember a push by a Scientology front group recently to bring attention to his literary works — now I know what happened to all the (re)printings.  [[Galaxy Press]] was an off-shoot of the publication arm of the Church of Scientology and is used solely to publish Hubbard’s non-fiction works.

He is consistently touted as one of the most prolific writers of his time — and that may be true in the sense that he did write a lot.  A very, very lot in fact, including non-fiction subjects he knew nearly nothing about such as radiation.  But what about the best-selling status?  Dianetics was no doubt a hit, the work that started it all.  But it only made the charts in the 80s for one reason: his organization(s) were buying up the books to inflate sales numbers.  This is not an assumtion.  Book vendors would often reorder the books to find their own price tag stickers already on them.

A more recent example is a book another self-published author and self-aggrandized wise man, [[Avatar Course|Harry Palmer]].  His book is touted by his company and followers as a “best seller” and yet there is not any record I can find of that being so, anywhere, at any time.  (Even asking such a question among his fans is taboo.)  Recent press releases claim it a best-seller literally, but previously the wording was less bold and more clever, saying “Living Deliberately” (originally titled “Creativism”) is the best-seller AMONG his books.  Deceptive, and effectively so. 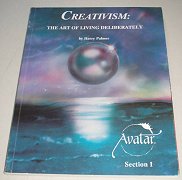 A virtually unknown Bible of sorts for the fringe group "Avatar"

If you ask a typical adherent of [[Avatar Course|Avatar]] (his [[LGAT|”self-development” courses]] which the book was clearly made to promote, full infomercial style), they think he is a household name. No, not the slightly known Harry Palmer the British agent of fiction you can find information on without digging too deep.  I mean a man who is promoted among his followers as a huge influence in various circles and the world at large.  Yet in the “outside” world, he is not even a footnote in any Who’s Who and there’s almost no information above marketing copy on him or his company.  A person with some common knowledge of culture will have heard of Hubbard or even make the Scientology connection; one person in ten thousand may not have heard of Palmer the guru.

But that is a guess, subject to any bias I may have from personal experience.  However, it can be quantified by the fact you can’t find him in ANY regular bookstore.  In the entire library system of the United States of America, there are only  a handful of copies of all his works — combined.  You can’t even find it in bargain-basement closeout stores — only as used books or fresh from their corporate printing press.

And though I doubt trustworthy numbers will ever be released by Star’s Edge (the publisher, his private company that runs everything), there are probably books sales around 300,000 — total, in the last twenty-five years.  Basis for the estimate?  A bit more than 100,000 people have taken his courses and participants are sold “power packs” of his books for proselytizing purposes, [[AMWAY]] fashion.

The funny thing is there is question as to him even being the writing author of the books, but I won’t get into that here.  The first work under his name, the “Thoughtstorm Manual” was produced at the Scientology mission he and his wife ran before it was reworked and rebranded into his own corporate religion / therapy / whatever you want to describe it as.  The sales pitch?  Between passages of frivolous hyperbole, we read, “In the years since its first appearance in 1986, Thoughtstorm has established itself as a favorite tool of the entrepreneur. It has inspired the creation of thousands of businesses and sits on the bookshelves of some of the wealthiest people in the world.”

Really?  Any examples?  Anyone can say this about anything; it would be easy to prove (it hasn’t been) but is hard to DISprove.  If NOT true,  there’s no law I know of against it, except maybe small claims fraud, but then it would probably be dismissed as puffery plus caveat emptor.  Amusuingly, these claims appeared within the binding of some of it’s earliest printings.  But let’s examine the truth we CAN know of it.  Why does a Google search not show anyone except consumers of his “Avatar Course” mentioning it with rarest of exception?  Talk is cheap … and so are copies of this book on Amazon, starting at $0.99.  Like other books credited to him, bookstores don’t care because there is no demand.  It is what it is, and it is a sharp contrast from the beliefs his books and courses teach his followers to “create”.

Politically, it is interesting to note that most dollar-store books in the category of politics seem to be liberal.  Are there more liberal writers that never made it, or is there simply a misestimated demand?  Does this indicate a shift in the position of the masses from left to right?  Local demographics are heavily Democrat, so you’d think they wouldn’t just sit there.  It’s hard to calculate, but at least the data is plain.

On the other hand, sometimes there’s no clonclusion to be had from public availability.  Especially if you only consider a local store’s inventory that isn’t second-hand.  For example, I went to Viddler’s, an old-fashioned five-and-dime style store and found patriotic ties and similar accessories.

They all had donkeys on them.

Does this mean that they are stocking what people want, or that’s what’s left over, having sold all the elephant paraphernalia?  Maybe this reflects the seller’s predilections and/or prejudices?  I’ll have to ask the curator next time I’m in.

But one things thing is for sure.  I may not want to end up sold in a close-out store, but I certainly wont wear the badge author of a best seller … unless someday it’s honestly true.