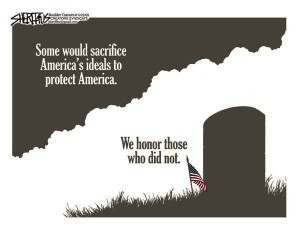 {A Facebook rant inspired by an image posted by a friend}

I’m talking about you TSA, and 99% of the “Thou Shall Not” legislation that undermines our everyday choices as citizens, families, consumers, and entrepreneurs. It’s the opposite of the Bill of Rights — which does not imply the government has the ability to GIVE rights, but rather restrictions such that they cannot violate them.

It’s not the government’s job to protect my child from plastic bags, my lungs from cancer, my community from my orientation / marriage choice, or mother earth from an incandescent lightbulb.

Freedom means the ends do not justify the means. And the means are being justified all over the place in a sham of a government regulations that once scrutinized nearly always primarily serve the interests that fund the parties that pass it.

We are supposed to be a republic and not a democracy because we do not deserve what the majority begs for — protection from oursleves and our neighbors and institutionalized dependency of the “haves-nots” on the “haves”, instead of fostering self-reliance and curbing government to allow for resonsible liberties.

Can you tell I’ve had it? There will be no true social or economic justice if we continue to pretend liberty is not the foundation of it all instead of an inconvenience toward a totally planned society. There is no such Utopia. We are living the ideal now if we choose — not a perfect one, but one that will continue to allow individuals, and not elected officials, to decide what is best for us and our communities.

Feds, we will gladly pay taxes to let you defend the borders (we wish you would), deliver the mail, keep the highways smooth, and so forth, but you better damn well stand down on all this other micromanaged bull$h!t or a revolution will be imminent — and more justified than any response to oppression that occured under King George.

There, now you know where I stand.