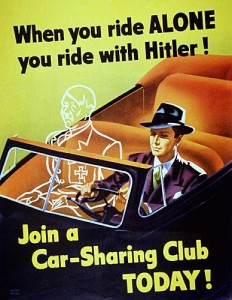 Hitler has been the most used and abused figure in heated debate since … well … Hitler.  It was around the birth of the World Wide Web that [[Godwin’s Law]] was discovered, namely that as a “discussion grows longer, the probability of a comparison involving Nazis or Hitler approaches 1.”  It is the epitome of hyperbole, a tried-and-true chestnut of expression when all else fails.  Of course, I jest, but maybe it’s not only sometimes appropriate, but ultimately useful to invoke he-who-must-be-named.

In any discussion, we try to find common ground — something we can agree on, or at least not have refuted by the other side.  Hitler and Nazism is understood to be the final example of what is evil and undesirable.  If the Right-to-Life camp can bear the argument “what if you knew the baby would become the next Hitler”, then it truly weathered the worst.  The same goes for Capital Punishment.  It applies to the whole spectrum of human values, where, at the other end, we find “Would you let Hitler drown if you could save him?” or “If Hitler was starving, would you give him something to eat?”

Such extreme examples take away the ambiguity of one’s conviction and test the very limitations of our ‘Christian’ souls with fire.  Born of its intuitive value even when used badly, it’s the most useful knife for cutting away lesser degrees of grey choices.

But it’s too late.  The comparisons have been so predominantly outlandish, emotional, and reflexive that we’re left with Miller’s Paradox: “As a network evolves, the number of Nazi comparisons not forestalled by citation to Godwin’s Law converges to zero.”  At this point when someone uses the analogy, no matter how clearly outside the fallacy of association, they will be seen as bad as … well … Hitler.