I Take No Pride In Being Gay 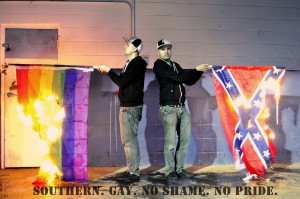 I am not proud of being gay. Nor am I ashamed. I am cool with it.

I do not have White Pride, Male Pride or Polish Pride although I am white, male, and Polish.

Humans are multifaceted beings. Each of us is probably able to subscribe to some minority, and some majority. There is probably something about each of us that can fit into the big box and fit into the small box. We have the option of defining ourselves as we choose.

I view homosexuality as a variation of human existence but never a deviation. I am cut out from the same cloth as every single human being that ever was, is, and will be. Like snowflakes no two cloths will ever be the same.

Flags initially define us but they also divide us. Flags that symbolize a rich history can also represent a bleak present. Flags can be a source of strength for one person and an easily marketed identity to another. But who are we without all the variances that divide us? At the core of our beings what is left of us once we subtract all the man-made symbols, labels, and definitions that we’ve attach to ourselves? Every human being is a unique individual composed by the sum of their parts. In society we divide ourselves by the sum of these parts.

The homosexual aspect of my being casts me into a minority. I’ve struggled my entire life to find my place within this minority. To reject the rainbow flag and all its modern connotations seems to be the ultimate taboo. To rebel against ones own “minority” is considered near blasphemy.

But there are so many things that anger and sadden me about current gay culture. Isn’t the ultimate goal to evolve into well-adjusted healthy happy human beings? Are we even striving to be happy and well-adjusted?

Thanks to those who have fought in the past for our current freedoms. But at what point to we become imprisoned by this freedom? Today we have people fighting for our freedom in the law books but what about liberation from our own internal oppressors? The little voice inside of us that tell us we are inferior? Without a sane voice to lead us through the darkness how many get sucked into the emptiness and vice? There is far too much emphasis on humanity’s differences and very little focus on how much we are all the same. I’ll be damned if I’ll feel inferior…or superior.

We must take accountability for our actions. As the LGBT Revolution evolves perhaps it is time to retool the slogans and the viewpoints. I find it impossible to take pride in being gay because it is not something that I worked for. It just is. I just am. So what is the the next step after pride? Being secure in our existences. I can stand behind any movement that celebrates diversity but find it strange after we’ve come this far to boast about it. Instead of gay pride how about “Diversity Recognition” or even “LGBT Recognition”?