It is hard to believe that legislators might not know what is in an important bill before Congress?  Actually, when you know the truth, it’s impossible to believe they have any clue.  In fact, one man’s realization inspired efforts to educate fellow citizens on this insane — and insanely important — issue.

And if there ought o be one more law, it should be that legislators must know what is in a bill, having read it themselves, before being allowed to vote on it.

Jerrol LeBaron gave me permission to share content from his email newsletter.  Here are some excerpts, emphasis mine:

In the last 4 years, Congress (Republicans and Democrats alike) has passed 12,500 pages worth of laws.

I know, because I copied every single one of them on my computer, printed and then bound them together. You see a picture of them here. This doesn’t include the proclamations, renaming of facilities and other things of this nature that Congress passed.

It also doesn’t include the 500 – 2000 pages worth of laws that Congress will undoubtedly pass before the year is out.

Practically speaking, these laws are passed in secret, and there is no wonder why they do it that way.

For example, On June 29th, H.R. 6064 was introduced into the House. It was sent to 8 different committees, passed by the House, passed by the senate, signed by the President and became law – ALL in one single day!

Also, on June 29th, a several hundred page bill (H.R. 4348) came up for a vote. Roughly two hours before the vote, about two hundred pages were added to this bill, making it almost 1100 pages long. Members of Congress were scurrying around in the halls inserting their last minute, special interest clauses and loopholes. No one had any concrete idea what was being inserted. The bill came up for a vote, was passed by both houses and became law.

These are just two examples of extreme recklessness on the part of our fools on the hill. Unfortunately, this type of behavior happens every day they are in session.  Their next act of disreputable conduct will be the bills they pass to “avert” the fiscal crisis (all they will do is prolong it). 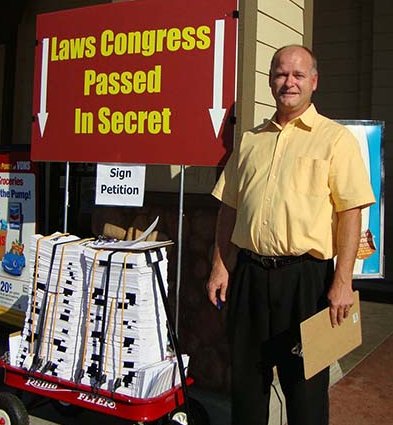 More to the point, “When Congress is permitted to bundle bills the way Wall Street bundles securities, and are allowed to add hundreds of pages to bills minutes before a vote, corruption, poorly thought out laws, loopholes, pork, special interest clauses and problems are the inevitable result.”  Amen, Jerrol.  Sadly, this isn’t news because many of this have been known for many years.  The real news is that people are finally making a stink about it.

So what’s the solution?

LeBaron writes, “The American people should have at least 30 days to review the absolute final versions of any bill or allocation of funds before the vote. We need to have enough time to get informed, intelligently respond and protect ourselves from self-serving interests and poorly thought out laws.”

And I can’t agree more when he says, “Full transparency BEFORE the vote is a must for ANY representative government. Citizens must have the opportunity to see whose fingers are in the pie well before the vote, not after the damage has already been done.”

So he’s been touring the nation, passing out flyers and getting petition signatures to address this corruption behemoth.  The only question I have is why there aren’t thousands of citizens in every state doing the same thing.

If you want to know more, or participate in this grass-roots campaign, visit www.HonorInOffice.org.