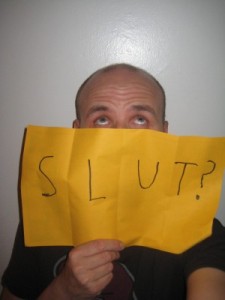 It’s 2010.  Women have been allowed out of the kitchen. Blacks are allowed to sit in the front of the bus.  I’m gay and I’ve even kissed a man in public!  But when will a person have the freedom to be sexually active and not be judged by most people for it?

In many ways we are a sexually-free culture.  It sometimes seems that more people cheat than stay loyal.  It also seems that more marriages end in divorce than endure.  But as our bodies wiggle away under the sheets have we matured enough as a culture to allow ourself the same mental freedom?  When are we going to be able to have safe sex freely without feeling guilty about it?

I once worked with an adorable Christian girl.  During a lunch break she revealed that she intended to keep her vagina away from a penis until the night of her wedding.  Around the table there was unanimous praise for how great and upstanding this was — until I spoke up.  I didn’t feel it was good or bad that she was a virgin.  It was a personal choice that worked for her but maybe not for someone else.  Most of these coworkers were loose, Godless partiers.  And even these rowdy atheists revealed themselves to be hanging on to deep-seeded Puritan ethics. In my eyes the virgin’s sexual organs are no better or worse than that of a well adjusted sex worker.

I will never call someone a slut.  I don’t believe in that word.  The concept of slut is outdated.  I don’t feel that the number of sexual partners a person has is any indication of the value of their character.  A person who has been with six thousand people is just as cool in my book as someone who has been with three.  We will never enjoy our 2010 bodies unless we put our 1950s mindset to rest.

I chuckled last week as my friend snuck to the bathhouse at 3 a.m. only to call someone a “dirty whore” hours later at brunch.  As he spoke the scent of stranger’s semen still lingered on his breath.  Cue Alanis Morissette track.