Putting the Politics Aside: 5 Things That Will Bring Us Together

{This Wildcard Wednesday we bring you guest blogger Jessica Ruanne, and the first of our content through MyBlogGuest.Com.  Jessica is a blogger from San Diego California, currently freelancing for Instant Checkmate. To follow Jessica and Instant Checkmate’s social media works, please follow her on Twitter or check her out on Crunchbase.} 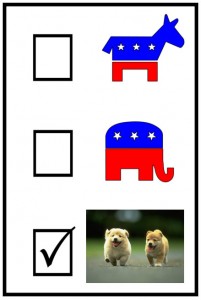 As the presidential election approaches, the political climate grows increasingly hostile. Recent studies indicate that the country hasn’t been this divided since The Civil War. The political division between Republicans and Democrats within Congress is so stark, they even have separate bathrooms. There is a great divide in ideology as people pick sides and square off in online forums and have heated debates over the individual versus the collective. Are you on the side of pluribus or unum? Before we all take to the streets with our bayonets and bandannas  let’s take a moment to explore some common ground.

We don’t need to declare a state of emergency just yet, folks!

Here Are 5 Simple Things We Can All Bond Over

No matter what subculture you belong to, you have a dance. Dancing is a bonding ritual humans have participated in since the dawn of our species. Whether you’re a square dancing Republican, moshing Liberal, or swinging Independent (get it?) you’ve probably gotten down on a dance floor somewhere. The act of getting off your dead one and moving your body to a beat with others is something we can all relate to.

Pictures of dogs hanging out with ducks, or a pig nursing puppies never sparked a heated debate on Facebook. We could all learn something from these unexpected and adorable relationships. If dogs and cats can put aside their differences, then Republicans and Democrats can too!

Never underestimate the power of the cute factor. Small furry things are a sure fire way to dissolve a heated discussion. Anything that evokes a collective “awww how cute” makes us turn down the level of animosity and tune in to our nurturing sides. Putting different species of baby animals all together is even better. Who could keep arguing over the debt ceiling when there is a bunny playing with a kitten?

Two people can be ready to tear each other apart, but roll a baby into the room and watch them instantly become doting partners. Something about a doe-eyed newborn forces people to settle down and act like grown ups. How can someone fight over taxation with an innocent little baby staring up at them? If we ever wanted the members of Congress to get along for a day, we should flood the debate floors with babies, bunnies, and kittens — triple whammy of cuteness!

Sometimes two people can come together in mutual disapproval. We can all agree that groups or individuals who spread messages of hate are bad. Nobody is going to disagree with you for discrediting a hate group. No matter how nasty the smear campaigns get, or how venomous the attack ads, nobody is endorsing a message of hate or violence. At least the warring political parties can stand together against extremist hate groups.

At a time when people are consumed with choosing sides, and quarreling over differences, we forget all the little things that bring us together. If your facebook feed is becoming a little too hostile, post a picture of a baby dancing with puppies and bring your friends back together.