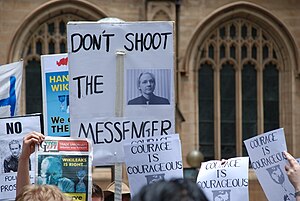 This TED Talk shows how perceived authority can be replaced with egalitarianism through transparency, and the Internet as a tool for inquiry.  Interestingly, the system praised in this lecture, Alaveteli,  is not available for citizens of the United States.  We are left with vilifying [[Julian Assange]] and illegally detaining [[Bradley Manning]].  An excerpt:

[I]t’s a crime, people are punished, quite severely in a lot of cases, for publishing or giving away official information. Now wouldn’t it be amazing, and really, this is what I want all of you to think about, if we had an Official Disclosure Act where officials were punished if they were found to have suppressed or hidden information that was in the public interest?