Who Are We Once We’ve Outgrown Pop Culture? 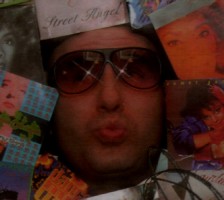 My earliest heroes were female pop stars. Deborah Harry. Pat Benatar. Stevie Nicks. Chrissie Hynde. As a child I was not interested in action figure or Barbie dolls.

In first grade during show and tell my classmates brought in ant farms, matchbox car collections, and army figures. I contributed my copy of Blondie’s Parallel Lines. Mrs. Morrison played “Heart Of Glass” for my classmates and I sang along.

By the time I was nine I’d collected over a hundred vinyl LPs. It was quite a shock to my twenty one year old babysitter when I whipped out my Nina Hagen records and I knew the lyrics better than she did. Everything about the pop culture of my childhood inspired me. Trapped in the wax grooves of those records was a world that was far more intelligent, romantic, and exciting than the confining walls of my bedroom. In 1984 I hung up my first Madonna poster, a pullout from the center of Smash Hits magazine.

In the 1990s I transitioned from teenager to twenties. I also transitioned from vinyl to CD. Undying, however, was my love for the top forty. My favorite musical artists were my fifth limb…a constant and reliable support in a world that was changing and crazed. As life rolled on it was if my own personal evolution was in sync with that of my favorite pop artists. Irregardless of the drama or tragedy I could always depend on the new Janet Jackson or Annie Lennox song to slip into my life and put words to the unspeakable. Throughout the 90s I darted from city to city and apartment to apartment. And wherever I laid my head there was a Madonna poster on the wall. Ciccone chic.

As the 2000s rolled around my favorite artists began to age yet they stayed relevant. And although I wasn’t interested in new artists like Britney Spears or Justin Timberlake I still found myself singing along to their songs. My beloved Madonna had morphed from virgin to ghetto cowgirl yet her new music still charted and weaved its way into the tapestry of my life. “Hollywood” meant as much to me at 28 as “Resue Me” had at 15. And my Confessions On A Dance Floor poster very much complimented my True Blue one.

Then came a strange a-ha moment in 2009. For the first time in my entire existence none of my favorite artists were charting on the top forty. Joni Mitchell had sunk into retirement and Stevie Nicks was doing her greatest hits for the tenth time on tour. And even the recent music by my old standbys was subpar. Madonna, Janet, and Mariah all released albums that struggled to appeal to the youth market. Not only were these albums commercial and artistic failures – they were the first albums by these artists I couldn’t relate to.

It was then I realized just how much of my identity revolved around the pop culture I’d grown up with. As my childhood inspirations slipped into irrelevance I was forced to come to terms with my own aging. Today’s hits are tomorrow’s oldies. And today’s oldies are the songs I danced to in high school back in 1992.

I took my Madonna posters off the wall two months ago today. After waking up next to Madonna for twenty five years it was a bittersweet break up. We’d grown apart. We were just in different places. For the first time since I was nine years old I woke up alone.

A new generation must always take over the pop culture torch. Eventually we will all slip into obscurity. It is now my turn to grow past what used to be my playground.