A Geek Explanation of the Federal “Shutdown” 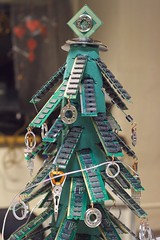 Since no one seems to understand how the government works, I figured I’d try to explain it in terms that even a geek can understand.

Think of the government as a family computer. Think of hard drive space as the Federal Budget, RAM as debt, and increasing the debt ceiling is basically adding more RAM. You want to install more and more software, even though every time you do, you get a virus or cause the system to slow down or crash intermittently. Sure it does more things, but your own skills at managing the thing does not improve. To fix this, you just keep adding larger drives and more RAM. You and your wife both do this. The two of you are Congress.

You’ve decided to buy an upgrade to the operating system without really asking anyone, one that will require adding more space than anything else you’ve ever done, even though you’re not sure how it works, if it will work, or if it will involve your kids eating Ramen noodles for the next two generations to cover it. But you swear you LOVE Ramen noodles. That is Obamacare. Not the noodles, the operating system upgrade. The noodles are the quality of life for the middle class, based on your children’s newspaper routes versus paying the electric bill to use the computer.

You don’t like being told you can’t upgrade. To be honest, she was on board with it for a while, even though the rest of the family wasn’t. But what do they know? They’re kids. They only know how to fix things when you screw up or show you how to right-click. Old and out of touch, you are the Senate. Your kids are the taxpayer if you haven’t figured it out yet.

At this point your wife isn’t telling you to get rid of the computer or shut it off, just stop adding $hit you don’t have room for unless you get rid of something else. That’s a misnomered “government shutdown“, which actually doesn’t shut anything down, just requires you to use the same hard drive and RAM you had last year.

So you decide to password protect the kid’s games. That should free up some space. Maybe take off the spam filter to remind everyone how important these things are when you don’t have them. Let’s make the screensaver show a photo-shopped picture of Mom drowning the kids. It’s her fault, after all.

But you can’t live without this upgrade and don’t want to permanently delete an iota of your hot donkey and elephant action video collection, so you stop talking to her. She’s putting her foot down, so she’s probably the bad guy anyway.

The kids are fed up. One of them, apparently hyped up on tea, wants to reformat the whole damned thing, and the other kids are starting to agree, or at least want a scandisk and defrag. There are a LOT of bad sectors, endless unused files, system utilities that don’t actually fix anything, and almost never off combat simulation games. You can figure all that out for yourself.

The kids are tired of the bickering, some taking sides, and some having trouble sleeping at night over the noise. But until they grow up and send their parents off to a nursing home, things will probably just get worse before they get better. A domestic of epic proportions is brewing, and a reboot every two to four years isn’t helping any more. But for now, the computer will still clunk along, crushed under it’s own lack of virtual memory and a questionable supply of RAM available. It will be tweaked to keep the kids at bay, but in the end the hard drive will eventually die and the whole computer will need to be replaced, perhaps thrown rightfully from atop a high platform.