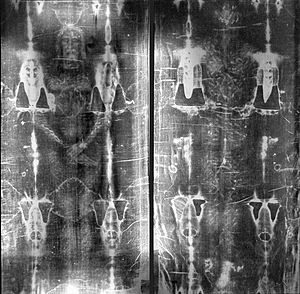 The “Cloth of Turin” is once again in the news. (It’s not intellectually honest to say “Shroud of Turin”, since there is no evidence it ever held a body). Yet another claim of Cloth believers has been proven wrong. The latest in a long line, I’m afraid.

Before the 14th century, there is no evidence of the Cloth’s existence. None. Its first documented appearance is in the 1350’s, supposedly brought back from the Holy Land by Geoffrey de Charny. Were I to turn back time, I would ask the good knight how he found the holiest relic in Christendom when a millennium’s worth of adventurers and Crusading European armies could not. His writings are curiously silent on the matter.

When trying to account for a thousand years of missing historical provenance, Shroudies say “the absence of evidence is not evidence of absence.” Makes you wonder what would be.

The archives of France’s National Library contain a 1389 Papal report by Bishop Pierre D’arcis, who had jurisdiction over the church where the Cloth was first exhibited. The letter says how his predecessor, Bishop Henri of Troyes, had “discovered the fraud” through confession from the forger. Shroudies replied the letter itself was the forgery, or that D’arcis was talking about a different cloth.

Several years ago, samples of the cloth were sent to three of the world’s leading radioisotope facilities. The results came back with a date range of 1260-1390 C.E., a virtual bullseye match with the historical record. The Shroudies finally gave up, and agreed that the Cloth of Turin was a fake.

Just kidding. Actually, they decided the samples were contaminated. Calculations later showed the cloth would have to be covered with several pounds of contaminant to bring the date back to the 1st century. But when you already know the “truth”, who cares about the facts?

The most significant remaining claim is that the Cloth’s image could not be produced with medieval techniques. This is essentially the position taken by a team of Christian scientists who “studied” the Shroud in the late ‘70s. As an argument from ignorance, this was a risky position to take.

Last week’s headlines show, after thirty years, just how risky. Experts in Italy have now reproduced an image with the Cloth’s features, using techniques and materials accessible to medieval artists. Yes, the experts were atheists and skeptics. What of it? Their results can be duplicated by anyone, regardless of their faith or the lack of it. Science is reproducible. Pseudoscience is not.

Why does the Cloth of Turin matter? No serious theologian cares about it, and the Catholic Church stated long ago that the authenticity of the Cloth is a matter for science to decide. The vast majority of Christians have no stake in its authenticity. Some even argue that the origins of the image are less important than its power to inspire. In a generation or so, the Shroud Center of Colorado Springs will be permanently closed (good riddance) and the Discovery Channel will lose interest.

Why is this even worth talking about?

This is a chronic American problem; Cloth belief is merely a symptom. It is not unique to any religious group or political stripe. How many liberals believe that health care is a right, but instead of saying so merely cite studies critical of markets? How many conservatives selectively quote research they believe will keep gays out of the military, but believe homosexuality is wrong regardless of any research?

I’m not saying reason and science are all that matters, or that people who value evidence will always reach the same conclusions. We won’t. But if you’ve got things you’ll never change your mind about, have the guts to say so. If you say science supports your views, or claim your politics are based on evidence, then we have a right to know to what extent you really care about the evidence at all.

That, it seems to me, is what intellectual integrity is all about. It is what America needs more of.