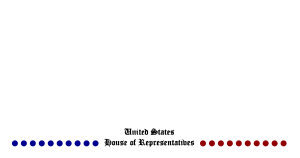 Breakdown of political party representation in the US House of Representatives during the 112th Congress. Blue: Democrat Red: Republican (Photo credit: Wikipedia)

It’s apparently some secret that the House of Representatives sets the federal budget and it’s Senate’s job to approve or send it back with suggestions and compromises. When the latter didn’t do this, the former was blamed.

Except that’s not exactly how it played out.

The Democrats (controlling the Senate) immediately labeled what was their own inaction as the Republicans (controlling the House) holding the country hostage. Sound familiar? Any time fiscal responsibility or some other “Right-Wing” agenda puts its foot down, the tactic of the other side is to replace compromise with blame. It’s like a kidnapper saying the police are holding a child hostage because they won’t give in to all their demands.

The “GOP Shutdown” is the new “Tea Party Downgrade”, where euphemisms rule the masses.

Now let’s be fair: The GOP had been trying to repeal and defund Obamacare to the point that Harry Reid’s accusation of obsession isn’t unfounded. It can also be argued that it’s the House’s job to fund what was already put into law, even though it was the last Congress that put such an explosion of spending in place. But it can also be argued that unlike that Congress and the Senate, THEY were representing the overwhelming will of the people who STILL don’t want the damned thing. And it can be argued it IS the right or even responsibility of the House to fund (or not fund) according to such conscience, regardless of what planned purchases were made.

But how can someone suggest the shame falls on the DNC? Two reasons, one blatant and the other circumstantial.

In terms of direct cause, the GOP-dominated House proposed what they must have known was an un-passable budget. Maybe they thought they needed to at least put on a show for their constituents. But it was the DNC-dominated Senators who refused to compromise. The House proposed all sorts of compromises, all rejected, including one that gave the Senate everything they wanted except exempting them personally from Obamacare’s mandate.

Against the balance of power, the SENATE insisted themselves to be the de facto writers of the budget.

While even the President showed flexibility, the usual accusatory talk of hostages sprinkled (liberally?) with hints of not negotiating with terrorists was fed to the media. The blogosphere seemed to backlash against this usual rhetoric and both parties were widely, and rightfully, criticized.

So why prolong the hold-out they blamed on the House? Why so much vitriol? Follow the money.

As the campaign to label the shutdown as a heinous Republican criminal act grew successful, the Democrat campaign bank accounts began to fill. Countless articles paired the letters GOP with shutdown to epic, nation-wide Pavlovian response. And to stoke the fires, huge dollar numbers were concocted to put a price tag on the damages. (Never mind the whole point of a shutdown is to NOT spend money!)

If the above was the smoking gun, this monetary incentive was the motive.  If not to cause (or fabricate) a crisis, then the incentive was clear to milk it — the longer, the better for them. Just not for America.