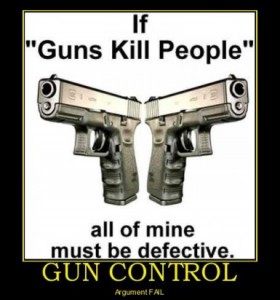 In the news today was yet another announcement that someone, this time a kid, took a gun (that he couldn’t legally have), and went out and shot 5 people (another illegal act), killing them (again illegal). He broke countless laws. Yet people are still screaming “there aughta be a law”. But there is a problem.

The problem with situations like this is that the folks who want to restrict or ban personal ownership of guns drags them out in an almost masturbatory glee whenever they occur. Right now some sleezebag law writer has a pen in 1 hand and something else in his other as he drafts yet another proposal that as always misses the important points while “doing something”. I just hope he has a bathroom tissue when he’s done.

You don’t fix these situations by acting in a panic so that you can claim you “did something”.
All you get are badly written laws that you have to go back to over and over again to patch holes and clarify – See NYS.

You don’t fix things by punishing a hundred million lawful gun owners for the illegal actions of a few thousand.

You don’t make guns so complex to use that they take minutes to ready and a masters degree to operate.

You don’t imposed overnight changed so that tens of thousands of law abiding legal owners wake up in the morning as criminals for the sheer crime of daring to exercise rights spelled out in the nations Constitution.

You don’t impose restrictions and delays that prevent law abiding citizens from being able to obtain a reliable means of self defense promptly so that they are effectively disarmed and helpless against criminal and deadly intent.

That is what you don’t do.

You fix them by acting when you are calm.
When you have had time to research the issue.
To carefully examine all of the concerns.
To look at the capabilities of your current system.
To understand the existing laws, and review where they are failing.

Then, and only then, can you carefully work to craft an excellent piece of legislation, one that does not need to be fast-tracked, voted on unread, not given time for public review, and allowed time for comment before making it law.

That is how you solve the gun problem.

Then you work on the more important part of the equation. The one in plain site. The one almost always missed.
The People.

Because until you do, sick people will continue to do evil things.
If you aren’t going to do that, if all you can do is “something now”, then here, have a tissue.
Another senseless act of violence will be along any minute now and you can finish.