What if the LAX Shooter Is Not Insane? 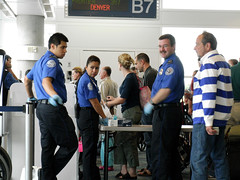 It took me a while to process what I felt about the shooting of [[TSA]] employees in Los Angeles. Everyone assumes it was a disturbed individual, or perhaps an “extremist” at best. But what if he wasn’t? So many citizens have been outraged at what the TSA “agents” do to the privacy and bodies of men women and children. It’s unthinkable. I’ve said it’s time to storm the gates in many a forum, dragging them out by citizens arrest and demanding change. The government refused to address this Orwellian practice. An apathetic citizenry is perhaps equally to blame.

My first reaction wasn’t how horrible the event was, but why something like this didn’t happen sooner.

I was shocked at myself. I don’t condone violence in general. How could I reconcile being against one man’s actions while being so sure in conscience that his probable motivation was a cause that was just? I still can’t condone what he did, but what if the difference is a shade or two of opinion, namely that he felt there was no other way to “fight the power” while the rest of us still are weighing more peaceable, democratically hopeful options?

In other words, what if being driven to such an act was not so ridiculous as to be written off as a chemical imbalance or watching too much FOX news or Alex Jones?

According to a detailed report on terrorism and extremism,

“Extremism runs in cycles. Leftist extremists are very active for a decade or more, and as they fade, right-wing extremists become active. During the late 1960s to the middle 1980s, leftist extremism was the greatest threat in the United States. From the mid-1980s to the present, the major threat of domestic terrorism has been primarily from right-wing extremists. If the cycle theory is correct, then left-wing terrorism will increase within the next few years. “

Look at the trend. Think of who is in charge and who is the underdog ideologically.

What if the way the winds blow depends which way the government leans? It seems that extremism tends to be a reactionary response from minority (under-represented) interests to unbalanced policy.

The other factor no one talks about is that extremism in America tends to be absorbed by the two major political parties, both using it’s energy while pacifying it to some extent. Some extreme views and methods actually become institutionalized policy, after which time the tide turns again. Then “the Man” designates those vehemently opposed as “extremists” even if they otherwise perhaps would not be perceived as such.

And as government grows out of control in myriad ways, more and more “terrorist” actions could be pre-cursors to larger unrest, perhaps even revolution, the perpetrators of which will be harder and harder to label insane — or even peg-holed as highly polarized by what we consider the Left or Right.

One could even argue such unrest plays a necessary role in demanding progress or reform, a la Malcolm X (pre-Haj) as a counterpart to MLK. Both seemed to play a role in motivating institutional change. Just as radicalism in the Middle East is a response to colonial oppression (followed by regional interference and support of an oppressive Western-founded state), so we must consider that “home-grown terrorism” has a root cause in governmental, institutionalized injustice. McVeigh’s Oklahoma bombing was allegedly a response to federally managed massacres of men, women, and children at Waco and Ruby Ridge. And fighting those who oppose injustice instead of admitting and correcting it will only fuel the opposition they are eager to eradicate, arguably justifying escalated, defiant actions.

That is what scares me. What if America is moving toward a state where endemic socio-political problems can no longer be remediated within the existing civil system, nor buried and ignored by an apathetic majority? Will there be a new human rights movement? Will we rage against the surveillance machine? Can they succeed or even have a voice by peaceful means?

My concern is not that there are those on the fringe who would use violence as a release valve for perceived injustices. My concern is that the injustices are not only real, but it is only a matter of time before some level of force or even violence will be considered justifiable, if not necessary, to sane, clear-thinking citizens.

I am not convinced Paul Ciancia, the shooter at LAX, is of sound mind. But from the details known, he seemed honestly desperate to do something about an unremediated injustice, one of the greatest breaches of American human rights in living recollection. How long before larger and larger numbers of more and more clear-headed individuals do the same?

And if Ciancia himself is of sound mind, the revolution may be closer than you think.