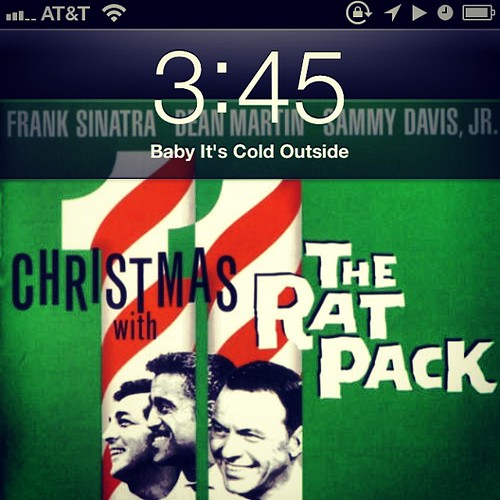 (Photo credit: mirandaceleste) Sammy Davis was Jewish. And Celion Dion is Canadian and sang the National Anthem once. Get over it.

I wish everyone a Blessed Holiday Season.

I don’t specifically say ‘Merry Christmas‘ to people I don’t know because I don’t know their preferred tradition. That is MY choice. It’s not trying to be “politically correct”, just polite. If you say Merry Christmas, I will gladly respond in kind. Or Happy Hanukkah for that matter. Or Festivus or Solstice or Eid or Kwanzaa. It’s all good.

What we need to discuss is that tolerance works both ways. If someone chooses to be offended by me saying (or not saying) Merry Christmas, they are the jerk, not me. They need to stop. Seriously. They are making a non-issue into a battleground for a political culture war.

If you are religious or secular, and choose to address others by their beliefs or your own, that is your blessed right. But if you have a problem other’s making that choice differently, you’re the problem. Get over your self-righteous importance or enforcing either “political correctness” or “religiosity” as the One True American Way.

Rights are not always things that are limited in available quantity, or where different rights can’t occupy the same space. What cannot be in the same place at the same time is common sense and bigotry. And that’s what this is — bigotry both against Christians and the reactionary bigotry by Christians against everyone else in “their” country. It’s no different than the rock-throwing between Vegans and Meat-Eaters, Ethnic Minorities and Whitefolk, Woman and Men, Gay and Straight.

If we can’t all get along, we the Grand Experiment has failed — or we have failed it. If you can’t just wish someone well during the season of many holidays, needing to make a political statement out of it whenever possible, or assuming some dark underlying motive on the part of everyone else, then for the Love of Good Will, hibernate until Valentine’s Day. Or Chinese New Year. Or Martin Luther King Day. It’s all good for the rest of us.