With the Republican advances in the last election, pundits are now talking of the need for bipartisanship. The heck with that. Divided government and partisan bickering are great things, because they limit the damage politicians can do.

At first glance, being against bipartisanship is like being against motherhood. How could anyone be against Democrats and Republicans cooperating to solve our problems? In theory, it sounds fine. But in practice, the evidence says that when either party controls both the legislative and executive branches, our biggest national problem (the growth of spending and debt) does not get solved. Quite the opposite. 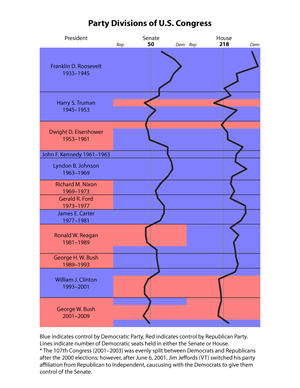 If you look at the relationship between the growth of government and partisan control, you learn some interesting things. The economist William Niskanen found that the only periods of relative fiscal restraint since WWII were the Eisenhower and Clinton years, during which the opposite party controlled Congress. Under those presidents, real federal spending grew less than 1 percent annually. During all other administrations, the rate of growth was typically three times higher. And here’s the kicker: It did not matter which party was in power. Republicans spend just as much as Democrats, if they get the chance.

Niskanen’s study stopped about five years ago, but the evidence continues to bear him out. The Bush administration spent like sailors on leave when Republicans held Congress. The Democratic victories in 2008 led to even more massive spending and debt, once again because one party controlled the executive and legislative branch.

So if you genuinely want less government with fewer services (something a national poll showed most Americans preferred), then voting for divided government makes complete sense. And let’s not forget that divided government is part of our heritage. James Madison, in the Federalist Papers, wrote of the necessity of separating power in order to pit “ambition against ambition”. I think that was pretty smart.

Divided government also reduces the possibly of bad ideas becoming law. Voters are suspicious of radical agendas in both major parties, and rightly so.

Most voters don’t favor a constitutional amendment to ban gay marriage, the use of our military to promote a neoconservative American empire, or criminalizing all abortions as murder.

Nor do they want a European-style cradle-to-grave welfare state, accompanied by nannyist regulators telling them what to drive and what to eat. Divided government keeps these and other lousy ideas from becoming the law of the land.

Voters knew exactly what they were doing when they threw out Republicans in 2006.

Bush and the Republican Congress were taxing and spending like LBJ in the 60’s. Something had to be done. We got a Democratic president in 2008 because McCain was a big-government Republican who ran a lousy campaign and the economy was in terrible shape. But given the Democrats’ misreading of their mandate (instead of “fix the economy”, they heard “more government everywhere”), they too had to be reeled in. No wonder we got a mere two years of Democratic rule.

So what happens now? If Republicans want to continue their success, they need to learn that it really is the economy, stupid. The tea party movement contains social conservatives, to be sure, but its emphasis is overwhelmingly on economic issues and the size and scope of the federal government.

Social issues are deliberately downplayed because they are divisive and distracting. Good thinking, that.

If Democrats want to become the party of the future, they need to stop being obsessed with the idea that borrowing money, redistributing wealth and passing laws are the best way to help America. Instead, they should be thinking about new ideas that involve more freedom, fiscal responsibility, individual responsibility, and smaller government.

I have no idea if either party will ever really “get it”. Despite the travesty of the Bush presidency, my money is still on the Republicans, but I’d be happy to be proven wrong. But until one or both of the major parties realizes that government taxes too much, spends too much, and has an important but constitutionally limited role in American life, pitting “ambition against ambition” may be the best we can do.