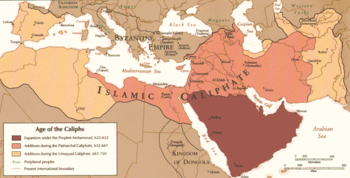 A video that I’ve seen passed around the last few years purports to be a historical expose Islam as inherently evil in deeds and a global agenda that will destroy the world if gone unchecked.

The speaker is Bill French (alias “Bill Warner”)*, posing as a historical authority, though implicitly rather than explicitly. He has no background on history, nor recognized qualifications on any of the subject matter. But even with benefit of the doubt, his lecture really exposes a poor understanding of history on his part, even perhaps blatantly deceptive in picking and choosing things that are half-true at best. Sadly, this is how for many years we taught history in America, a Eurocentric view across all time instead of the larger world view across many different times, but he takes it to the extreme.

Inaccuracy is not the real crime here. It is the treatment of a subject in a fanatically prejudiced context. He connected and concocted a narrative of countless historical “dots” to reduce all of history to “Islam = Evil”.

By such methods of interpretation, you can lump any sets of injustices on whole ethnicities rather than kings or nations. He’s treating all the Caliphates and all the battles, and all the practices of various times as if they are some unifying theme or master plan. Imagine lumping all kingdoms and acts by Christians or Europeans over a thousand years together. It would be just as condemning, and just as silly (or deceiving).

I MIGHT understand (though never condone) teaching history this way to children, but to promote such views as a purported “historian” means he is anything but. He’s talking about Islam and Europe as if they are two unchanging individuals living for a thousand years. Facts and details can be argues, and interpretations may vary. But no student of history or historian of any worth would take this seriously. It’s a crime against scholarship AND decency.

I’ve read plenty of historians do it well without trying to prove anything or make some people out to be more or less evil than others. But he made his agenda and motivation clear at the start of the video that this is a holy war in his own mind that must be won against an amorphous, world-ending leviatan. Therefore, an honest evaluation of his speeches and books has to place him in the same camp as anyone else trying to peddle fear and hate. And the fact he is articulately quasi-educated makes him all the more dangerous.

Remember, selective interpretations of history have justified everything from holocausts to the rape of Palestine in the name of an ancient homeland, the superiority of Aryans to the savagery of native peoples. It lays the foundation for wars and atrocities, and then lets the victors sleep soundly at night. I say we need to wake up before we have a reason not to sleep.

*The video is on a social media channel for the hate site politicalislam.com. The for-profit “Center for the Study of Political Islam”, owned by French, has a central theme to promote (“educate”) the idea a sinister “Political Islam” is the true nature of the faith of Islam. The terms are often used interchangeably, the standard bait-and-switch that reveals and fosters prejudice. More details can be found on the SPLC website.