{The following is a letter I recently rediscovered, to my daughter’s teacher, dated 20 November 2000, who took it upon themselves to politicize the presidential election controversy of the time.}

My daughter informed me of an unusual situation that occurred in your classroom. Apparently, you were explaining why the Florida ballot was difficult for some people to understand, and drew it on the board. My child also came home with the impression that Bush asked for a recount, perhaps referring to the media’s error in coverage of prematurely “giving” the state to Gore and then having more votes come in.

This is not about who is right and wrong, but this is a problem for two reasons. First, your bias may have influenced your expression of the facts to the point of inaccuracy. For example, my child described your drawing of the ballot with additional instructions that were not there, and that you did not even draw the arrows that allegedly were the problem in the first place. (See enclosed for your reference {similar image at right}.) 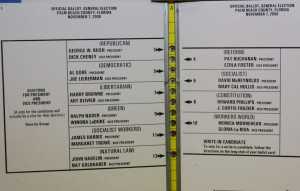 The degree of your power as a teacher is painfully clear by the fact that she HAD SEEN an unmodified photo image of the ballot that was nothing like what you drew, and still was led to a conflicting conclusion by your drawing and explanation. You see, weeks earlier, I showed her the photo and asked here what button to push for each of the candidates. There was no prodding, explanation, or even a hint as to why I was asking her. Nothing short of scientific method, my nine-year-old got it right every time.

One could also argue that Florida had used the “butterfly” format for decades without complaint, or that they were given copies of it on three separate occasions before voting. This is a touchy subject, so sticking to the facts as accurately as possible is an obvious responsibility. However, there is way too much hearsay, emotional opinion, and plain ‘ole partisan bias on both sides to trust anyone to be rational about this – even teachers like ourselves.

But this leads me to the second reason the situation, however it may have occurred, may have caused a problem. As teachers, we all have some bias, but at the primary grade levels in particular it is imperative to avoid exposing it to our children. They easily borrow the opinions of any authority figure, not unlike our own vulnerability toward the press, but more so. It is bad enough they question nearly nothing their parents believe, but that is a familial right. It would even be a breach of common-sense teaching ethics to tell my students whom I voted for, no matter how tempted to jump on the soapbox.

Also, you may not have come out and accused Bush of cheating, but the impression received, and therefore taken as factual truth, was that Bush’s brother somehow affected the election process. Can such an accusation be fair, if not dangerously misleading as a teacher, considering the voting process is managed jointly between representatives of both major political parties, and the executive and legislative powers on the state level are not involved at all? It is fair that your gut feeling may be one of foul play, but this would hardly be justification to voice a position as an educated person, especially to children.

I do not question your intentions. This political situation is frustrating to all of us. Letting your guard down is a mistake I have made a few times myself. I only want you to be more aware of your influence over the children, and act accordingly.