Cause of the Housing Bubble: Politics Before Principle 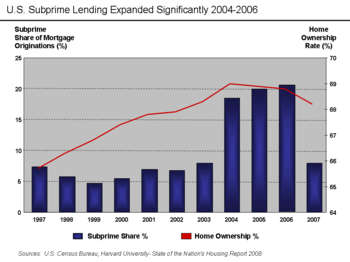 {Published in the Colorado Springs Gazette, along with counter-point by John Horner, October 26, 2011}

The collapse of the housing bubble is not due to devious Wall Street whizzes, or predatory bankers, or evil capitalist greed. Such forces make compelling villains in the fairy tale that is modern politics. NPR, Hollywood and the New York Times will have a field day with them. The facts, however, tell a different story.

To understand why the housing market crashed and burned, we must look at the legal and regulatory environment American housing has operated in over the past twenty years, enthusiastically created by politicians and “pro-housing” activists. In this case, the road to Mortgage Hell is paved with their good intentions.

The two most important contributors to the housing bubble were 1) the expansion of the money supply by the Fed, and 2) a systematic assault on mortgage underwriting standards by politicians of both parties.

Shortly after September 11th 2001, the nation was in shock and anticipating an economic crisis. In response, the Federal Reserve began to expand the money supply. It grew by a third over the course of three years.

Even worse, during that same period the Fed dropped its short term interest rate from 6.25% to only 1%. This was lower than the real rate of inflation, creating the bizarre and dangerous situation where you made money by borrowing it and lost money if you saved. Al Qaida couldn’t have planned it better.

The resulting economic distortions created a “demand bubble”. What do we all know is the best investment to borrow money for? Real estate. During the mid-2000’s, real estate loans grew twice as fast as sales of other goods and services. This led to an overbuilding of housing stock, and the inevitable crash once markets corrected themselves.

Such a correction might have been swift and bearable, were it not for the roundhouse hook of the one-two punch: The political assault on mortgage underwriting standards.

Starting in the 90’s, based on politically driven and badly flawed studies, the usual lefty suspects managed to convince Congress that the poor and minorities were not getting their share of home loans. Washington went after the problem the only way it can: By passing laws and threatening people with jail. A few examples:

In the mid 90’s the Department of Justice began prosecuting banks with different rejection rates for minorities, even if they used the same standards.

Thanks to the Community Reinvestment Act of 1995, banks began partnering with “community organizers” to give out home loans to borrowers who otherwise might not qualify.

Worst of all, Freddie Mac and Fannie Mae, the government-sponsored enterprises (GSEs) that drive America’s mortgage train, became the largest single holders of mortgages in America. They led the way in relaxed lending standards, proudly trumpeting their role in increasing home ownership.

Placing them under the Department of Housing and Urban Development in the 90’s just made the problem worse. HUD is a political organization whose mission is to buy votes for the incumbent party. For example, in 2005 HUD mandated a 50 percent target for GSE lending to lower income borrowers. Great politics, but not in the public interest.

Freddie Mac and Fannie Mae became HUD’s whipping boys, and indulged in perverse incentives. They bought almost any mortgage from anybody, even ones private markets would never touch. This created a moral hazard for lenders and investors, who now had a guaranteed buyer behind their mortgage-backed securities. Who wouldn’t jump at the change to obtain a high rate of return with minimal risk, with the implicit guarantee that the government would bail them out?

And guess what? They were right. Freddie Mac and Fannie Mae are now in conservatorship. You and I are on the hook for about $200 billion. I’m shocked, shocked to learn that politically created entities were gambling with taxpayer’s money.

Like it or not, the housing crisis was the direct and predictable result of politics over principle, of fantasy over reality.