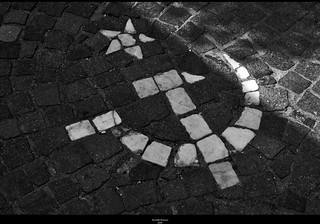 I had a good, long conversation with one of my world-traveling friends a few nights ago about Russia. He works with an international consulting firm and has had exposure to several different types of governmental systems including Russia and China. The one thing that became clear to me after a statement he made about the controlling elements of those systems which are former or currently governed by a Communist or Socialist state is this: there is now fundamentally no difference between those systems and the one we currently have in the US.
Now before you patriots get all of your panties bunchy, let me explain something. My friend reported to me that the following is true of all Commie or post-commie systems that he has been exposed to: everything is controlled by a few powerful entities or families who also control most of the nation’s monetary resources.

In China, it has become a hybrid Capitalist/Communist system in that the state is completely pandering to corporations. And actually even after Mao took over this is the way it has always been. Mao used “old money” in old families to fund the Communization of China. It was never “The People’s Republic” and it never will be. It is owned by the ruling elite and that elite mainly consists of the old family wealth that has been in China for nigh on thousands of years. There is no “shared wealth” there. That is and always has been an illusion. If you don’t believe that, check out China’s level of poverty which has been sustained since the early part of the last century. Where was the “shared wealth?” Nowhere. It was never there and still is not there. It’s the same thing for Russia. The USSR sustained the same or worse poverty levels during their tenure and there are still extremely poor people within Russia’s system. There was no equity there. Ever.

In Russia, things are controlled by either crime syndicates and/or corporate magnates with “old money.” Same thing as China. There never was “power in the proletariat.” It was always the wealthy that ran things, albeit first “controlled” by the centralized powers but never really that way. Everything was funded by “old money,” just not the “old money” that was in the palaces. It was the “old money” that was outside of the ruling class that took power by funding “the revolution.” That money still controls things today.

Does any of this sound familiar, oh anti-commie patriots of These United States? Ideology doesn’t really matter when looking at things this way. Beliefs don’t either. The facts are that whoever holds the gold makes the rules. It doesn’t matter if your banner is red, white and blue or mostly red. We are being slowly but surely taken over by the same means, just a different method.

What does matter is this: These United States were created and founded in order to stop this pattern. The fact is, we almost did. Read up on the ongoing feud between Andrew Jackson and Nicolas Biddle (“The Bank War”). Our war for independence was not just fought against the sovereignty of England, but especially the backers of that sovereignty. If you think that all Magna Carta did was take power away from royalty and place it back in the hands of “the people” you’re reading it wrong. It placed power in the hands of the money-holders and at the time, those holders had more than Buckingham Palace ever had.

The reality of it all is that it really doesn’t matter about ideology when the people in power are only interested in either taking power from those who already have it or retaining that power. If you really look at every instance of major conflict or even “minor” takeovers of existing regimes, it all points back to who will make the largest possible gains. The myth of “fighting evil” is just that. No one ever truly fought to rid the world of evil for the sake of good, they simply did it to either protect their own interests and/or make gains from the results. Don’t lie to yourselves that it’s ever been anything more than that. For any of you who believe that this nation isn’t failing hard at what it was originally intended to be, and we’re still “the land of opportunity, the free and the home of the brave” or this “life, liberty and the pursuit of happiness” are priorities any longer, you’re buried so deep in the bullshit you may never dig yourself out.

Get real, get informed and get smart. Then get out there and make a damn difference. Until that happens, it is just going to get worse. You don’t want to be a “commie?” Stop pretending there’s a difference between us and “them.”