Crisis in the Ukraine: ‘There is Only Power’ 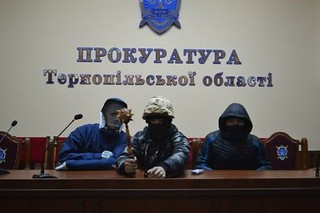 The news from the [[Ukraine]] is grim. It appears her struggle toward democracy, prosperity and the protection of basic freedoms for her citizens is far from over. Government buildings are being occupied and protest rallies are being held in the capital. The government has responded with brutality and violence. It is a sad, sad day.

I’ve held faculty appointments at Russian universities and have traveled through eastern Ukraine extensively. My ancestral roots are from that part of the world. I speak one of the country’s two languages reasonably well and have a lot of friends there. My connection with the Ukraine is professional and personal.

Today repeats 500 years of Ukrainian history: Once again, the country is caught between rival empires. To the east, the Russian bear wants to bring the Ukraine back into the fold. To the west lie tantalizing examples of countries with political freedoms and a better standard of living. In fact, the eastern part of the country is largely Russian-speaking people who identify as ethnic Russians. In the west, the dominant language is Ukrainian, and the older Ukrainian folk culture still thrives.

[[Victor Yanukovich]], Ukraine’s president, is Russian, drawing his support from the east and south. WikiLeaks diplomatic cables confirm his party’s connections with organized crime. This is just par for the course in Ukrainian politics and is exactly what the long-suffering Ukrainian people are so tired of.

That’s why the protests are so significant. Not only are there protest rallies and occupations of government buildings in [[Kiev]], but they have now spread to [[Odessa]] and [[Dnepropetrovsk]] (“Dnepro” for short). These are major cities in the south and east, normally considered bastions of support for Yanukovich and his cronies.

I have been Skyping with a friend in Dnepro, a politically active lawyer who knows the system well and worked for the opposition during Ukraine’s short-lived “Orange Revolution” in 2004. “The police take protesters away, who knows where. The system is so corrupt that we don’t care any more. Those of you who live in a normal country cannot understand what life is like here. There is no protection for basic human rights, for human dignity, no respect for the rule of law. There is only power.”

The same historical tension in the Ukraine between the country’s communist past in the east and its liberal future in the west plays out in the role of government. Tragically, the Ukraine has both too little government and too much. Too little, because there are not constitutional guarantees of basic rights for Ukrainian citizens, fading respect for the rule of law, and a very weak infrastructure to protect property rights. Too much, because the economy is crippled through cronyism, predatory taxation and outright confiscation of property.

One owner of a clothing store told me that the mayor of her city, a crony of Yanukovich, tripled taxes on her business and forced her hopelessly in debt to pay them. She is now struggling to keep the lights on. Other entrepreneurs in the Ukraine have similar stories. But they know they have to pay up. If they don’t, their licenses will mysteriously be revoked and their business given to others with better political connections.

So far, the west and east seem willing to let the solution in Ukraine resolve itself internally. The Russian foreign minister has stated that as the official position of the Russian government. Hopefully President [[Barack Obama]] will resist the usual screaming from the neocons to bring freedom and democracy to the country at the point of a tank barrel. We all know how well that works out.

But the struggle to liberty and prosperity appears to be very, very hard. We know what societies need to flourish: The rule of law, a system of property rights, a constitution that secures the rights of citizens, a market economy. We know where the Ukraine needs to go, and her people do too. Tragically, history has yet to show her an easy way to get there.