Next week, the scientific community will mark the two hundred and fourth anniversary of Charles Darwin’s birth. According to its website, Darwin Day 2013 will be “an international celebration of science and humanity”. And if it’s not, it darned well should be. 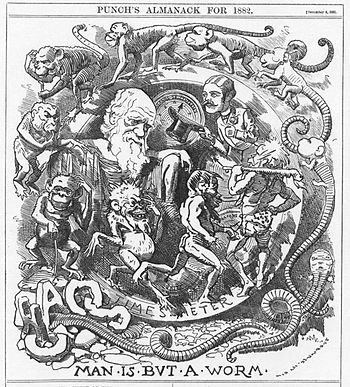 [[Charles Darwin]] was the first person to describe evolution via [[natural selection]] with scientific rigor. His description offered the first scientific and testable explanation of the diversity and range of life on earth, where species came from, and how the magnificent tapestry of all life, including modern humans, emerged over time from common origins.

Evolution is a fact, but it is also a theory, in its most beautiful, scientific sense: A unifying set of ideas that withstands challenges from alternative explanations, connecting with existing knowledge in a consistent and powerful way.

There are maybe half a dozen or so truly great Theories in the history of humanity. These bold ideas are not only supported by an unimaginably vast quantity of evidence, but are also stunningly beautiful. Isaac Newton gave us the Theory of Gravitation in “[[Principia Mathematica]]”. Two centuries later, Albert Einstein made it even more beautiful with his “[[Theory of General Relativity]]”. In between the two, Darwin gave us “[[Origin of Species]]”.

Evolution predicted that genetic information should be transmitted through a discrete, copying process that should be almost exact but with some errors. Scientists later discovered DNA, the molecule that did exactly that. It has accurately predicted what certain fossils should look like and how old they would be when found. Today, it identifies the most fruitful paths for new drug development. Without the knowledge produced by the Theory of Evolution, advanced genetic medical therapies would not be possible.

Someone of intellectual integrity is constantly willing to test their ideas, but also understands the idea of the burden of proof. If there is an enormous amount of evidence to support an idea, and only a small amount against it, then the burden of proof is on the side with less evidence to put forth a better idea.

When Newton’s Theory of Gravitation, for example, couldn’t explain the motion of the planet Uranus, the right thing to do was not throwing out Newton’s Laws. The burden of proof was on people who believed Newton was wrong to come up with a better idea. Which they couldn’t.

Instead, a sharp astronomer suggested that an as-yet undiscovered planet could explain the motion of Uranus, and predicted where to look. Shortly afterwards, Neptune was found. That, ladies and gentlemen, is how it’s done.

[[Creationism]] and “[[Intelligent Design]]” have been proposed as alternatives to Darwinian evolution. These have time and time again been shown to offer humanity nothing of scientific value. That’s because they start with the answer they claim to prove, are not testable, and are powered primarily by wishful thinking. Even prominent evangelical Christians, members of the faith group most closely associated with ID, are now recognizing this.

Dr. Francis Collins is the current director of the National Institutes of Health. He is one of the most influential people in genetics on the planet. He is also a deeply committed Evangelical Christian. Dr. Collins has publicly rejected ID as being both bad science and bad religion, and instead works to help Christians reconcile the tenets of their faith with the truth of Darwinian evolution. In this, he is a man of intellectual integrity.

On Feb. 12, we can best honor one of humanity’s greatest minds by rededicating ourselves to his ideals. Follow the evidence, no matter where it leads. Make predictions and test them. Change your mind if the predictions come out wrong. And finally, don’t be afraid of what others may say. If the evidence says you’re right, they’ll come around. Ultimately, they’ll have no choice.