Measuring Freedom and Tyranny by Jobs

The mounting number of government jobs versus the private (FREE) sector is scary as hell and people don’t see what happens at the end of that road. They honestly think an economy like North Korea can’t happen here, all the while doing everything they can to dismantle those things that ensures it does not. 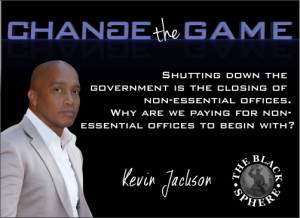 I must suggest a quantitative measure of government with regards to its role in society. If it SERVES society, the structures will make up far less of a nation’s GDP than if it MANAGES or even OWNS society. The rise in the “public sector” (a misnomer IMO) as a growing percentage of GDP tells us how “Socialist” we already really are, even if “Corporatism” is a more accurate term on the granular level.

The American Great Experiment is founded on the premise government SERVES, not RULES, and yet half the country (mis)interprets this to mean the people have power THROUGH government instead of using it to maintain the economic and personal Liberty of individuals and (real as opposed to mass collective) communities.

It SEEMS a no-brainer to “use” government for the good of the people (whatever that means to the majority or representatives of the time), and yet we were warned that power corrupts and what is given to good men can always be passed to and shared with the not-so-good. That is why some of us solidly assert that Big Government is contrary to liberty, common sense, and America itself.

We have forgotten that government is NOT the only answer — if an answer at all — to society’s problems. It was meant to be a watchdog at best and instead we ended up on the wrong end of the leash, be it shell games with equality or deflowering the fruits of one’s labor at every turn.

So how free are we? When the government is the biggest employer in many communities, we have to wonder.

Based on discussions with people in or from Europe, it does seem what we would call socialism actually works for some of them. But on the other hand, most totalitarian regimes of the 20th Century stem from Communism or Socialism in various forms, and as an overarching economic system, it’s always a total failure. That is what Americans rightly fear, not things like universal health care per se, but national housekeeping as the dominant economic mechanism.

Oddly enough, the American “Right” has a similar (and similarly dangerous) attitude toward “social housekeeping” and pushes us also toward a nanny statism, though more disciplinary (theo-moral) than the dependency-driven agenda of the Left.}