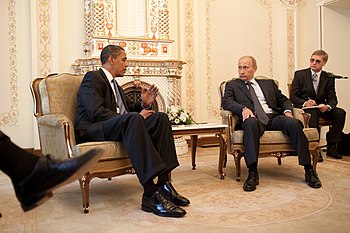 What’s the difference between [[Rick Santorum]] and [[Barack Obama]]? You got me.

Oh sure, they have disagreements about some policy issues here and there, and they draw on different bases of support. But their similarities are much more disturbing.

Here’s an edited quote from one of them, with partisan references removed: “[My opponents’] have this idea that people should be left alone, be able to do whatever they want to do … There is no such society … where that succeeds …”

Here’s the other: “[My opponents’] philosophy is simple: we are better off when everyone is left to fend for themselves and play by their own rules. Well, I’m here to say they are wrong.”

Both use ridiculous straw men to play on our innate fear of a world without order. Both want you to believe that without their strong, wise hands steering the ship of America, we will collapse into anarchy and chaos. It’s a universal tale, old as politics itself.

When I lived in Russia, I heard arguments like this all the time. One of the reasons communism took hold there was because, due to their unique history, the Russian people have always worried more about anarchy than tyranny. This comes as a shock to most Westerners. We naively assume that people everywhere want freedom, responsibility for their own lives, and democracy. If only that were so.

I have met Russians who told me to my face “Pri Stalina buyla luchshe”: Things were better under Stalin. They want to return to a communist dictatorship. At least for now, such people are viewed in Russia like the [[KKK]] is here. But like the KKK, their mere existence is creepy.

[[Vladimir Putin]] worked tirelessly to portray himself as a strong man and decisive leader. He was rewarded at the polls with a landslide win over multiple candidates for the Russian presidency. While I have no doubt the recent elections were contaminated with widespread fraud, the fact is that if you want to succeed in Russian politics, you have to show that you value order, strength and stability over freedom and individual responsibility.

But in America? Why is it that two major politicians on the national stage believe that strategy will propel them to elective office? Are they right?

Of course no one wants a society without rules. Civilization as we have come to understand it requires a basic infrastructure of law and order. Humanity has struggled for thousands of years to figure this out, and while utopia continues to elude us, we have a pretty good idea of the rules necessary for the foundation of a stable, prosperous society. The hideous, twisted monster that is the modern regulatory and entitlement state goes far, far beyond anything even close.

Freedom doesn’t mean “playing by your own rules”, nor does it mean “doing what you want to do”. These are infantile straw men. The idea behind the pursuit of happiness is that you can do what you want as long as you respect that same pursuit in others. And the “different rules” that “others” supposedly play by always turn out to be written by politicians of both parties. Why should we trust them now?

Politicians like Santorum and Obama grew up knowing that they were smarter and/or more divinely guided than the rest of us. In middle school, they were the kids who volunteered to clean the erasers so the teacher would make them hall monitor. They have always believed people need to be told what to do, and they are just the people to do the telling.

It is not disorder when millions of Americans create, earn, keep and distribute wealth in ways others may not approve of. It is life.

It is not anarchy when millions of Americans act on their consciences to direct their own lives. It is liberty.

It is not chaos when people decide for themselves whom to love and how. It is the pursuit of happiness. Sound familiar?