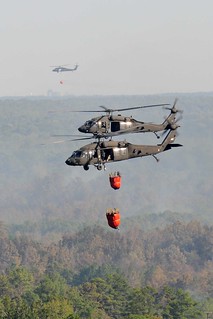 As “prayer warriors” gather to pray for rain, for a miracle, or just for the safety of the firefighters, might I suggest that we give reason her due?

After all, which is doing a better job, right here and right now, at achieving any of the things people are so desperately praying for?

Do you want safety for the firefighters? Thank their high-tech protection gear. Designed to withstand impossibly high temperatures, it is completely and totally artificial, the product of the rigorous exercise of human reason.

Do you want the firefighters to save lives and property? Thank their training.

Humanity wasn’t born with the knowledge of how to fight fires. We used to cower before them in terror and run away in panic, stupefied before the awesome power of something we did not understand. And if we couldn’t run fast enough, we died in unbearable agony.

Now we fare better. Events of the past two days show us how far we are from mastering fire, but we now know much more. We respond to nature’s inferno not in ignorance, not in fear, but with experience, dedication, and determination.

Firefighters do this on behalf of all humanity, girded with the armor of reason.

Do you want the flames to be fought effectively? Thank the chemists who developed fire retardant, being dropped from tankers even as you read this.

Would you rather they assault the flames with a scientifically designed fire suppression compound, or water pre-treated with a supernatural incantation? For that matter, what exactly makes it possible for human beings to construct a metal craft weighing hundreds of tons, and then hurl it through the air in response to our will? How exactly did we figure that out? Through science.

Through constant questioning. Constant experimentation. Intellectual curiosity. Above all, through the tenacity of dedicated individuals not afraid of the rigorous and dedicated application of their rational minds.

Do you want rain? Then stop praying for it and start helping your fellow humans figure out how to make it happen. Why don’t we have weather control systems orbiting the planet at this very moment? Why can’t we direct rain where it is needed, diffuse hurricanes before they make landfall, and manage the weather instead of letting it control our lives?

It’s not because such things are impossible. They’re not. We don’t have weather control for one reason: We haven’t figured it out. That’s all.

Weather control won’t get here in time to help us today. But could we get it in a century or two? I think we can. I think we will. But we’ll never make progress until we throw off this embarrassingly primitive notion that the weather is somehow subject to forces utterly beyond our comprehension, and that appeals to the supernatural will help bring us weather we want. The evidence says that is not true. So let’s get over it and move on.

What if instead of praying for rain, or a miracle, or a host of Nice But Conveniently Uncheckable Things, all that time and effort were spent donating to the Red Cross? Sheltering evacuees? Practicing fire mitigation? Or even just going about your business as usual, producing some good or service that helps people get on with their lives? Wouldn’t that make the world a better place?

What if some bright youngster, instead of growing up thinking we’re powerless to do anything about the weather, grew up to study nonlinear dynamics? What if he or she creates the new mathematics we need to control the weather? Is that so beyond the realm of imagination? It is not beyond mine.

So march forth, reason warriors! Praise to all of you for keeping firefighters safe, property intact, fires contained, and humanity moving ever forward.

And over the next few weeks, as the fire winds down to its inevitable end, Colorado Springs rebuilds from the ashes, and reason triumphs over adversity yet again, I ask one last thing.

Please keep everyone impacted by this random act of nature in your kind and extremely rational thoughts.