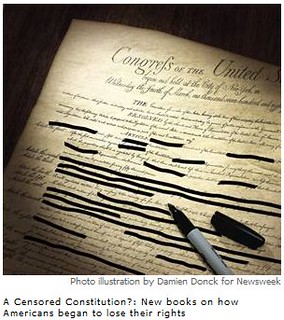 {Published November 1st, 2012. The audio of a debate of this topic by this author and a contrary speaker can be found here.}

The numbered amendments on Colorado’s ballot may not seem to have much in common. What could legalizing marijuana and limiting campaign contributions have to do with one another?
Both are opportunities for voters to show what they think about the U.S. Constitution. and what they think about liberty.

If you believe liberty includes the right to do what you want with your body and your money while respecting those same rights in others, vote yes on 64 and no on 65.

Amendments 64 and 65 exist because both the left and the right will happily run roughshod over the parts of the Constitution they find inconvenient. The drug war has made mincemeat of the Fourth Amendment, while campaign finance regulation disembowels the First.

The Fourth Amendment says: “The right of the people to be secure in their persons, houses, papers, and effects, against unreasonable searches and seizures, shall not be violated, and no Warrants shall issue, but upon probable cause, supported by Oath or affirmation, and particularly describing the place to be searched, and the persons or things to be seized.” It does not add parenthetically “unless you smoke marijuana”.

But virtually every Supreme Court decision that weakens the protections of the Fourth Amendment involves drugs.

Because drug use is consensual, because drugs are easy to manufacture and conceal, and because they can be carried virtually anywhere inside anything, drug prohibition simply cannot be enforced in any meaningful way unless the Fourth Amendment is brutally gutted.
Since the war on drugs began, the Supreme Court has upheld warrantless searches of bags in car trunks, stop-and-frisk searches by law enforcement, and suspicionless police sweeps, to name just a few of the milder examples.

Check your American history: The Fourth Amendment was originally adopted in response to British searches for “seditious” rebels under arbitrary and vaguely written warrants. You don’t have to be Jon Stewart to see the irony.

Where is the outrage of pro-liberty conservatives on this issue?

ls their rhetorical powder not dry? Must we bear *any* price in the drug war, as long as we continue to send the message that Drugs Are Bad? Where is the track record of success, the greater security that could at least in theory justify giving up some of our precious liberty in the mad pursuit of exorcising the Demon Weed? Or was Ben Franklin right, in that we deserve neither?

But if marijuana prohibition is the addiction causing the right to trample liberty in pursuit of a buzz, campaign finance regulation is the left’s crack cocaine.

There is simply no way that limiting campaign contributions could be made into a Twenty-Eighth amendment without repealing the First. Yes, money isn’t speech, but all speech requires the expenditure of resources. And the Constitution states very clearly when laws apply to only to persons, and when the scope is intended to be broader.

The First Amendment says “Congress shall make no law abridging the freedom of speech …” lt doesn’t add “… of persons, anyway”. Nor does it say “… except for corporations”. That omission, I suggest, is deliberate. Let’s not forget that those tea-partying corporate stooges at the ACLU filed an amicus brief in support of [[Citizens United]].

Both the drug war and campaign finance regulation arise out of understandable frustration with real problems that afflict America today. Crime, poverty, the urban underclass, crony capitalism, politics that dispense privilege instead of promoting the common good, these are all problems that cry out for resolution by people of good will everywhere.

But why is giving up liberty always the first thing we try? When faced with a social problem, the first question we should ask ourselves ought to be “Can we make this better with more freedom?”

I believe for both the problems of drug use and political privilege that the answer is yes. If you agree. vote yes on 64 and no on 65. We can have both liberty and security, if we take just a little more responsibility for our own lives.