Why Shouldn’t We Learn to Control Mother Nature? 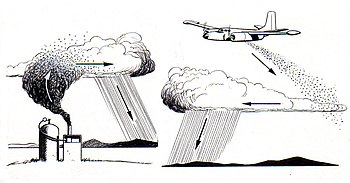 {Published in the Colorado Springs Gazette as “Some day man should master Mother Nature”, June 20, 2013}

As we grieve for all that we have lost during the fire, I urge all of us to come together as a community and rededicate ourselves to the study of the natural world. It’s high time humanity learned how to control the weather. Or at least make it rain when and where we need it.

When disaster strikes, I’m tired of running away, of being inspired by first responders, of being powerless until the wind changes or the storm is past. When the next fire comes, I want the technology to move some clouds around and drop millions of gallons of water on it. Period, end of story.

It is my understanding that the Black Forest fire appears to be human-caused. That shouldn’t dampen our enthusiasm for rain control one bit. Right now, nature can lay a trap for thousands of innocents that any psycho with a match can spring. Why should humanity sit still for that?

I understand the feelings of awe nature inspires. We are drawn to the forest, the mountains, the water and even fire because they are a part of us; part of where we came from, part of who we are. I’m writing this on the shore of the Black Sea, vacationing here precisely because I’m drawn to the water. That, and other natural attractions.

And yet, just two years ago I visited Chernobyl, a few hundred kilometers to the north. It is a chilling experience, something you never forget. I know that when it comes to technology, we can be terribly blind. But only, I would argue, if we close our eyes.

How will humanity get weather control? I have absolutely no idea. From what I understand of climate modeling and chaos theory, it appears to be a hard problem. All right, a very, very, hard problem. And because weather is a highly complex interconnected system, the political problems with weather management could be even harder. Harder, perhaps, but not impossible.

Whatever else we’ll need to put rain where we want it, I’m guessing we’ll need mathematics no one has yet thought of; some new, imaginative way of seeing the world no one has yet envisioned. We might need new computer algorithms, and maybe some new physics while we’re at it. Hard to know for sure.

Then again, who knows what we might come up with in a decade or two, let alone the next century? It’s unimaginable, at least to me. Provided we don’t sacrifice our natural curiosity on the altar of her power.

It is my fond hope the events of these past days will inspire at least a few people to be more curious, to dedicate themselves to understanding the world around them, and to put another rung on the ladder of human progress, so that those who come after them can climb still higher.

When faced with catastrophe, we should howl like Lear in the face of the tempest. But unlike the Bard’s audience, we ought to be sustained by a common hope against the storm: Someday, we will become its master.