All Strokes Are Too Broad When It Comes to Religion 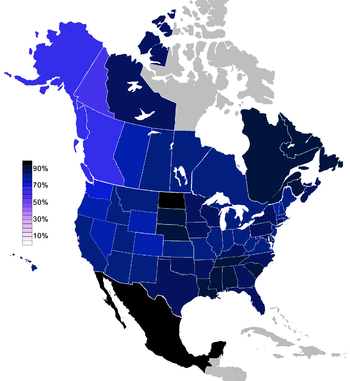 The percentage of people in North America who identify with a religion as opposed to having “no religion.” (Photo credit: Wikipedia)

{This essay was inspired by a discussion on LinkedIn after the posting of an article about changing demographics of those who identify themselves as “religious”.}

When people talk about religion, it’s almost like they are speaking different languages. Many look at it only as primarily an ideology, or a moral code, or a system of arbitrary ritual. It is, of course, all and none of these. But we focus on each aspect to either credit or condemn religion. We must exercise introspection to weed out prejudicial assumptions.

For example, the idea that education and technology somehow reduces the prevalence (or pertinence) of religion, as if being religious is socially backward or based on ignorance. No, THAT is ignorant, and offensive. It takes the one facet of religion — belief — and judges it against empirical modes of thought. Of course faith narratives are often confused as scientific or literal historical truths by believers of old, and even some today, but convincing someone there wasn’t two platypuses (platypi?) on Noah’s Ark doesn’t sink the whole ship.

Others may ignore the power of ritual, or deem it frivolous, or even attribute it to coercive psychology. That is not altogether untrue, but again, ignorant, like saying traffic signals are pointless because sometimes you are the only one on the road, or accidents can still happen. The objection overlaps that of belief as superstition or control. For those who parrot prayers and repeat acts unquestioned, that may hold true, and it is historical fact that ritual was not independent of power in many times and places throughout history. But to beleaguer this point is to disrespect the vast rest of us who find meaning in ritual through true, willful deliberation.

So we can choose to narrowly define religion to burn a straw man at the stake, but forget that not everyone agrees that religion be narrow in any respect. We disparage those who do not worship an anthropomorphic Absolute (non-theists such as most Buddhists, for example) as being merely “philosophies”, in spite of temples, scriptures, a priesthood, and ceremony of all colors. To say religion and theism are the same are not only wrong on the count of religion being more than belief, but also that any given relationship with life (rather than just world-view) does not require a god. People can and do ritualize their lives and can have a foundation of values, individually and collectively, regardless of their beliefs specific to the nature of the universe, physically or spiritually. But I digress, and for simplicity will hereforth segregate that which is “religious” from that which is secular.

Religion is credited with cultural cohesion and comfort. It is also blamed for tribalism and persecution. It is said to set one free, or to bind one with chains. However, just because religion plays a role in things like comfort (and conversely things like intolerance), does not mean that these are unique to religion, nor emblematic of it. Morality (and fanaticism) are found both secularly and “religiously”, with countless good works (and death tolls of millions) all around.

In other words, we must recognize that “religiosity” is an outward form of human coping, morality, and conceptual framework for understanding the world — and it’s too big to make any broad statement that is meaningfully accurate.

No particular “religious” ideology need be incompatible with science or the modern world because it deals primarily with human nature and the human condition, regardless of explanative beliefs surrounding it. They need not be incompatible with secularism, nor each other. Collective identity and xenophobic tension alike are in our DNA, regardless of the form it takes. Any set of beliefs can be used toward any end, as window dressing at best, rationalization at worst.

There was rarely or ever actually any such thing as a “religious war”, any more than there is such as thing a “religious car” made to take a family to temple. It is merely a vehicle for pretext and rhetoric that creates a justification for the very human drives of power and control — if we let it. Religion is simply an aspect of culture that will never — and I would suggest should not — go away.

The solution is for each of us to leave our limited views of religion at the door, to talk to believers (including those who claim no faith) on their own terms instead of by our own measuring. We must be aware that even basic beliefs about deity cannot be taken for granted in a world of almost infinite diversity. For each man is truly his own religion, and to judge him or his beliefs by that of another is the very definition of prejudice.