With Mass Surveillance, We Are Now All Guilty 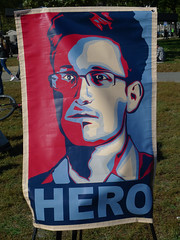 Sometimes you have to embrace the assumptions of an argument to really bring out how it is false, or even dangerous. For example, I do not believe mass surveillance works (or should even be allowed to work, but we’ll get to that). I do not have confidence that such activities are done by competent people, or that the data will only be used now and in all unknown futures for the greater good. And I most certainly will not accept that some possible tragedy or even a past one such as 9-11 ought to be bandered as an excuse to degredate rights and freedoms past constitutional limits, as horrible as they may be. And I believe such limits have been breached, in agreement with some Federal judges and not others. Lastly, I believe that an expectation and protection of privacy is a political and human right that vitally supports all other liberties, as much as any amendment in the [[Bill of Rights]]. In fact, it’s implicit by them, or at least shares the same philosophical underpinnings as the fundamentals of our legal system, from “guilty until proven innocent” to the due process of warrants.

But let’s forget all that.

Let’s assume the government having access to all our emails, texts, GPS blips, and phone records doesn’t cost us more than a few tax dollars, does not inconvenience us, and will not threaten us in any way from now until the end of time. Let’s assume the government can keep it secure and always only hire competent, benevolent keepers, with an oath similar to a priest in confession.

Most important of all, let’s assume it works. Threats have been averted and deaths will be avoided.

By all this, there really is no other judgment: we must indict Snowden for treason. Why? Because he revealed terrorists were being spied on, thereby warning them.

Let’s all agree this is true. By revealing that such data was being collected for the purpose of catching bad guys, specifically terrorists, it’s akin to yelling during a drug bust that someone is wearing a wire.

But let’s be honest about one detail first. Finding leads isn’t the same as collecting evidence. Evidence is collected by looking specifically and methodically for something, not browsing everywhere hoping to find something that might be related to an unknown crime or plot. The amount of resources wasted on that — even now with amazing technology — is the opposite of good investigative work. The ideal metaphor is fishing versus hunting. A hunter identifies a target and then tracks and attacks, or even traps. Fishing is not knowing what you will catch, and any shadow or bite is suspect no matter how inedible, unlawful, or undesirable it is on the hook. What the NSA is now doing is netting the whole pond and letting go what it doesn’t want (yet).

One could argue that patrol cars are fishing. Well, there’s two main problems with that analogy. First, they are not primarily combing for illegal activities, waiting for someone to screw up. Police presence is about deterrent, availability, and protection in general. Secondly, they are not driving their patrol cars through your bedroom, den desk, or hard drive. A traffic camera is not the same thing as a wire tap or opening your mail. The distinction between public and private is of paramount legal consideration in law enforcement.

So to continue, we must accept that this new way of “law enforcement” is for the better, should be lawful, and any “reasonable expectation of privacy” so defended by patriots and Supreme Court judges alike is outdated in our digital world.

The right of the people to be secure in their persons, houses, papers, and effects, against unreasonable searches and seizures, shall not be violated, and no Warrants shall issue, but upon probable cause, supported by Oath or affirmation, and particularly describing the place to be searched, and the persons or things to be seized.

The [[Fourth Amendment]] has to go, or at least make it null through excessive reinterpretation that would bypass or dispose of a number of other longstanding legal safeguard concepts. We must focus on subjectifying “unreasonable” to it’s extreme, while ignoring the “supported” and “particularly describing” conditions that otherwise make the law clear.

To breach into what some will always insist are private correspondence (“papers and effects” before the time of emails and browsing histories), a warrant used to be required. This is called due process, and requires [[just cause]]. But even more problematic is that a warrant or search must be for specific things related to a specific person or property based on a specific suspicion. There’s no such thing as a general warrant to go fishing for incriminating evidence. In fact, when evidence is found or collected without all these considerations fulfilled, it cannot even be used as evidence.

Until now, an accused or guilty man must walk free in such cases because in the wisdom of the law the ends cannot justify the means, or else the State will be rewarded instead of punished for violating what just as well can be an innocent person’s rights. The precedent leads to … oh, never mind, such wisdom is no longer taught, understood, and is even argued against by some, so for the sake of this evaluation, we will cast it aside.

Maybe we can get around all that, anyway, using the internationally recognized “imminent threat” clause, namely that an officer of the law may act without usual due process based on circumstances that are “instant, overwhelming, and leaving no choice of means, and no moment for deliberation.”

But first, we must redefine imminent threat to include it’s very opposite, when some unknown really bad thing might happen someday by unknown parties, simply because such things have happened before and we believe some people want to do it again and are capable (in this case regardless of any and all other means of intelligence and law enforcement).

Otherwise, we must assume we are in a constant state of imminent danger, and mass surveillance is and urgent measure, unambiguously vital, and no others methods are available or sufficient.

A World Without Crime

This is all a lot to swallow, but once swallowed, there will be no further ethical impediments to law enforcement and government doing whatever the powers that be deem necessary, not just for extreme cases, but for any and all violations (or perceived violations at that point), no matter how small.

I’ve always considered people mocking the term “slippery slope” or “frog slowly boiled in water” akin to birds laughing at the idea that the wind blows. But then that’s the whole idea. If you don’t feel the water getting hotter, you’re probably the frog. Someone only two generations ago would think some of the laws we have today as utter science fiction, not merely ones related to technology that did not exist, but encroachments on the most basic, everyday actions and things. But we will rid ourselves of that notion, at least as a negative.

Instead, let’s argue by extension that mass surveillance could be used to (pre)determine more and more crime, maybe nearly all premeditated crime. Not just people Googling pressure cookers as potential bombers, but a myriad of cross-referenced and algorithm-ized comments and wanderings of any and every individual could preempt a potential act of defiance … ahem, I mean crime … by initiating a friendly checkup by the authorities. By the belief that mass surveillance is acceptable for one purpose, it is similarly arguable that no one’s rights are violated for any other as well. Imagine how many lives could be saved in everyday situations — certainly more each year than a dozen 9-11 attacks. If this is where we go by measuring the sale of principles and protections in raw body counts and anecdotal tragedies, a surveillance police state is not only ethical, but required any time there is a significant threat, real or potential.

Therefore, to maintain the position that the NSA et alia is in final consequence a kind, gentle Big Brother we can live with, or our times even demand, we must waiver or even outright cast aside so many existing founding principles. The ends must be fully rationalized to justify the means, as difficult as it is for the rest of us to accept.

And so Snowden is guilty as sin, aiding and abetting the enemy. Unfortunately, by the consequence of this Brave New World, not of incidental technological capability, but the shift in the most basic premises of law in a free society, that enemy is us. We are to be treated in our rights of person as guilty until proven innocent, all suspects, all the time. So we’ll all have to be good, by whatever standard the presumably ubiquitously benign State deems appropriate … or else.