Trip to Mars More than an Awesome Adventure 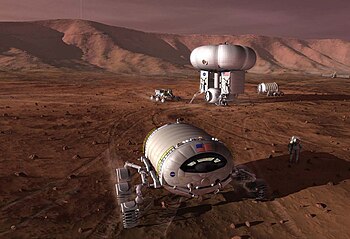 Humans on Mars within the next century? Ridiculous. We can do it in 10 years.

I recently returned from Chicago, running a 10K with my son. But the real race he wants to run is millions of kilometers long. He wants to go to Mars. And for all I know, he just might do it.

We met in Chicago to be part of a Mars One meetup — a group of smart, idealistic people who share the vision of the Mars One project. Mars One is a private sector venture that will build the first human settlements on Mars within my lifetime. Not just within my lifetime, but within the next decade.

The founders of Mars One are space exploration professionals. They have thought this through, and have thought well. Multiple missions every two years, the first of which will be unmanned. Robots to build the habitat before the astronauts arrive. Water from the Martian soil. Oxygen from the water. Food from hydroponics. Rockets from SpaceX. No science fiction here, this is all doable with current technology.

The biggest problem is money. Mars One estimates it will cost about six billion dollars to put humans on the Red Planet. How will they generate a revenue stream that large? Live coverage and video feeds. Reality TV taken to a whole new level. If people care as much about a mission to Mars as they do about, say, the Olympics, then the broadcast rights and licensing could make the numbers work. All without costing the taxpayer a dime.

But we won’t have to wait until the first episode of “Mars House” to get in on the action. Astronauts have to be trained years in advance. In fact, the first selection round is going on right now. Who will be part of the first crews to head into space? It could be anybody. Including you. Mars One is inviting anyone interested to apply for astronaut candidacy. Think that’s crazy? They already have over 200,000 applicants. Including my son.

Naturally, the odds are long. If the application process stopped today, roughly 1 in 10,000 would make the cut. But here’s the real kicker: It’s a one-way trip. If you live through the multi-month voyage and survive entry, descent, and landing, you’ll die on Mars. Hopefully not for years, but Mars One has no plans for return trips. Humanity’s first extra-terrestrial baby steps will toddle forward, and only forward.

Scary by modern standards, sure. But think about history. The first settlers in the New World knew they would never return to their homes. That was part of the deal. If you’re reading this, chances are you’re descended from people who found the courage to leave the comfort of their old home behind forever. It’s part of the human spirit. It is what we do.

That’s the real value of Mars One, I think: A reminder of what we can do. On a planet with most habitable regions explored, in societies awash in bad ideas and worse politics, we have forgotten how to dream. We have forgotten what, under the right circumstances, individuals with vision and passion can accomplish, if we would just get out of their way and let them do what they are driven to do. A private sector, voluntarily funded, humankind-embracing mission to Mars can remind us once again of the splendid things our species is capable of.

I thought up most of this column while running that 10K with my son, who paced me for most of the race and then took off with a few minutes to go. Watching him fade into the distance, I thought about a much longer journey he wants to take, one whose finish line I cannot reach. If he does go, will the joy of having a personal connection to the next step in humanity’s evolution be worth the pain of never seeing my son again?

I cannot know. But part of me desperately wants to find out.