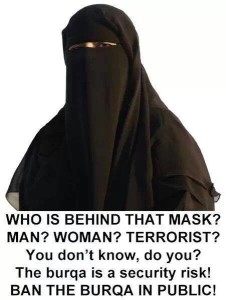 I seriously think it should be okay if I want to dress as a ninja in public.

Who is behind that mask? Man? Woman? Terrorist? (Sorry, i was supposed to capitalize these for effect.)

Actually, I do, because I have common sense. The odds are astronomically high it can be nothing other than an Arabic woman. Someone wearing a burqa in K-Mart is hardly under suspicion for trying to blow up the housewares department in podunk, Wisconsin, as strategic a target as it may seem to a soccer mom returning from a prayer meeting. Sure it could happen. And it could also be Chuck Norris under cover as store security.

Cultural garb aside, the right of anonymity is crucial to a free society, for reasons I shouldn’t have to explain. There are places that ban masks, and even costumes, and I really have to question if they remember when America was a free country.

When someone I knew posted this picture, I really wasn’t sure if it was a joke or if they were serious. If you were a terrorist, the last thing you’d do is dress up in garb associated with some part of the culture we associate with it, everyone already on guard from their media-ingrained prejudices.

The argument is that we’re under attack, and should “consider” extreme measures.

But we’re not under attack. Our way of life isn’t under attack. At least nothing that justifies fashion-based paranoia. There are no fallout shelters or armed guards on every corner. There is no change in the schedule of our everyday lives. Nobody buys a bomb-proof car for their teenage son. Instead, you’re more likely to be hit in a drive-by than ever witness some random “attack” except on the news every ten years. And especially not by someone covering their face with religious garb — which actually has never happened.

The real enemy is us. Or, rather, the people who want us to be in “fight or flight” mode all the time to give up the freedoms we are pretending to protect — and send more kids to die overseas and justify huge military budgets. And if we start banning people wearing burqas (or ski masks or mardi gras faces or whatever), we don’t deserve to be free. Basic liberties shouldn’t be negotiable where barely plausible, hypothetical bad things happening justify ridiculous, infringing means to prevent them.

Seriously, we’re doing it to ourselves. It’s time to take a stand by NOT being afraid of “what might be”.

Still don’t agree? Fine. Let’s start by banning backpacks. You know, like the one the Boston bomber used in a real life scenario and not just our imaginations. But should we ban ALL backpacks, or just the brand he used? We all know concerts and theaters already do their due diligence by inspecting them before you enter. Or more likely they just want to protect their profits from store-bought candy and drinks.

Banning backpacks might seem ridiculous, but rationally it is LESS ridiculous than banning burqas. What’s the difference? Our IRrational fear of something foreign to us, propped up by irrational associations between modest Middle Eastern women and the extinction of Christian non-Arabic people. After all, they must be out to get us if they dress like ninjas.