I Thought I Was the Freedom Fighter

I grew to believe over my lifetime, that as Americans, our liberties have been chipped away at for generations and I often felt I was the rare crackpot that noticed or cared. There are countless laws and permits for every occasion, and I’ve written and spoken out on this subject more times than I can count. 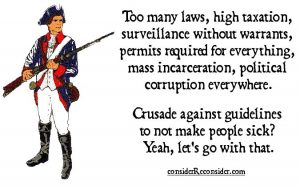 Now we’re being asked to follow health safety guidelines, and it’s almost a nonexistent thing that any individual has been arrested or fined for not following them. The government’s hand is so light, even I don’t feel it. And yet, people cooped up in their homes are ready for a rebellion. The reader likely has no idea how much I would like to join in, but in conscience, I can’t.

I apparently have a very different idea of what Liberty means than other people. For me it was never about the ability to do whatever I want. I tolerate traffic laws, for example, because they (usually) make sense, and it’s hardly tyranny for follow them the times I disagree. Why should it be MY call when a traffic engineer and studies and accident stats are in place?

When it comes to safety, especially acts that may harm others, using only my own judgment is an infringement on other people’s liberty. If I unilaterally decide to speed, others don’t have a choice about their safety. It is also reasonable to follow community guidelines in everyday things because the alternative is for everyone to think they know best for everyone else, not just themselves. As much as I prefer anarchism, this is where a few rules cannot rationally be argued against.

That’s where the line is crossed. People who are not medical experts are convinced they know better to the point they “resist” the “authority” telling them to do what health care experts are asking. To rationalize it, they lean on the fringe, often debunked experts on the hopes they might be right like those cases in history where mainstream thought was wrong. It’s intellectual roulette, but they think this gives them a free pass, and can’t be told what to do. Frankly, they should be told what to do, because they are arguably not free-willed in the sense of being able to exercise reasonable adult judgment on their own. It’s worse than willfully ignorant — it’s a position that can only be considered dangerous to others, even if they were to end up coincidentally right. As an anarchist, I would not want some government to put them in their place, but even rightful social shame is being rejected as “virtue signaling,” the same way bigots hide behind the idea they are being accused of unfair political incorrectness.

I never thought I would side with “government” and bemoan the vices of the Internet 2.0 as much as I do today. All the commotion about the COVID-19 epidemic is revealing that we are not worthy of self-rule, and the Internet may actually be to blame. Equality of audience access has bred the misbelief one’s own opinion is equally worth that of others, and therefore we have the same right to decide for ourselves matters over our heads. And most things are over most people’s heads for the simple fact civilization means specialized knowledge. We count on each other to be right most of the time, and usually are or we wouldn’t have gotten this far.

I still don’t trust the government. I still consider the possibility experts are wrong from time to time as part of the process of furthering knowledge and understanding. I still don’t like being told what to do, and have the urge to rebel. But I sure won’t put my faith in a Facebook friend who believes they are exceptional (in a good way), proudly not among the many who have the sense to follow the best guesses of a consensus of experts. Using the colour of Constitutional Liberty to defend that position is particularly offensive to me, as it sets all of us back as not having enough understanding of Rights to defend them when the issue is real.

Maybe I’m getting old. Or maybe other people are just too eager to defend the wrong things for the right reasons. I just wonder where they were when the real infringements took hold.