{Published in The Buffalo News in 1999, original text submission follows. Incidentally, someone left me a voice mail the next day or so thanking me for being a religious education teacher that would stand up against pseudo-scientific theology.} 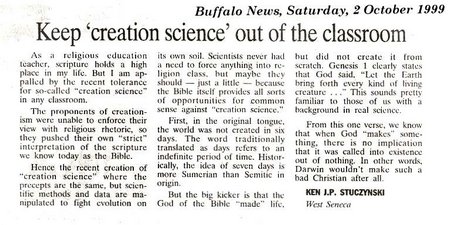 Scripture holds a high place in my life, but I am appalled by the recent tolerance for so-called “creation science” in any classroom, even in religion class. The proponents of creationism were unable to enforce their exclusive world-view with religious rhetoric, pushing their own “strict” interpretation of the scripture we know today as “the Bible.” Hence the recent creation of “Creation Science” where the precepts are the same, but scientific methods and data are manipulated to fight Evolution on its own soil.

Scientists never had a need to force anything into religion class, but maybe it should (just a little), because the Bible itself provides all sorts of opportunities for common sense against “creation science.” First, in the original tongue, the world was not created in six days. The word traditionally translated as days refers to an indefinite period of time. Historically, the idea of seven days is more Sumerian than Semitic in origin.

But the big kicker is that the God of the Bible “made” life, but DID NOT create it from scratch. Genesis 1 (v.24) clearly states that God said “Let the Earth bring forth every kind of living creature…” This sounds pretty familiar to those of us with a background in real science. From this one verse, if you “take the Bible literally,” we know that when God “makes” something, there is no implication that it was called into existence out of nothing. In other words, Darwin wouldn’t make such a bad Christian after all.