The End of the World is Nigh!  Or, at least as much as it’s always been. 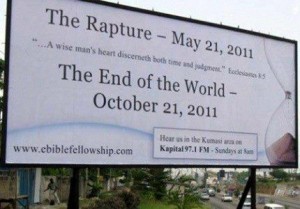 Their original date was May 21st, 2011, and after their second bogus claim are somehow still in business.

Are you a prophet or the follower of one?  If so, I’m willing to place bets against any and all such prophesies, at any odds, because frankly, I have more sense than you.  Besides, if I’m wrong, it might be a bit hard for you to collect.  But I won’t let you weasel out of it if (or when rather) I’m right.

The [[Jehovah%27s_Witnesses#Failed_predictions|Jehovah’s Witnesses]] predicted it (and it passed) at least eight times in the last century or so.  And each time they backtrack to say either it happened in some invisible way (they believe that Christ DID return non-physically in 1914, whatever that means) or their prophesy was incomplete or misunderstood.  No harm in that?  The flock, incidentally, often sold off their possessions in droves.   Ditto for so many recent [[Rapture]] sightings, in spite of the spurious (IMO) scriptural basis such a thing will ever happen.

And whenever there are natural disasters, wars, and rumors of wars, etc., so may people just can’t help themselves.

Back in 1999, I knew a guy who put off getting a web site (my profession is web development and consultation) because by January, we’ll all be “hiding in caves”.  He was quite convinced Y2K was the end.  After all, the Book of Revelation foretold it.  Never mind that John was talking about the events of his own time or that he ate one too many bad mushrooms on the island of Patmos.  Sometime in January, I asked, “It’s 2000 and the world didn’t end; NOW are you ready for a website?”  (Looking back, all this should have been a warning sign that doing business with him would be a nightmare bordering on a lawsuit.)

And you may think this is just wacky Christians who conveniently forget Matthew Chapter 24, but now that 2012 is coming around, it’s the dawning of the [[Age of Aquarius]] all over again (and again).  Never mind the arbitrary distinctions of ages based vaguely in astronomical measurements, or that the hippies in the 60s beat it to death.

Now we are counting on the Mayans.

Because we know even LESS of what they meant by not marking dates ad inifinitum than the writers of the New Testament, all the easier to latch onto it as another excuse for [[millenialism]].  But seriously, folks, I have a date stamper from my childhood that only goes to 1986 and we’re all still here.  And still, thousands of New Age predictions have been stirring, piggy-backing the Mayans or being coincidentally independent but with the same dates.

And many of them are already hedging their bets.

The caveat is that even if some [[cataclysm]] does not up-heave the world as we know it, there will be some unseen fundamental shift in the evolution of our consciousness as a species and/or planet.  So basically, they are betting that an invisible rabbit will descend from a scientifically undetectable mother-ship, the effects of which will be felt only by believing, and everyone else is welcome to try and prove otherwise.

Sorry, but if something as important as a global esoteric, metaphysical paradigm shift cannot be quantified as having any effect whatsoever in our undeniably physical, empirically measurable world, then what’s the point?  Let’s be creative and drive this home with hard questions:

Forget aliens landing or Jesus Christ having his own cable network.  Will there be significantly less (or more) war-related deaths, mortality rates, mental illness, or ecological disasters?  These are the sorts of things people cite all the time as “evidence” of the end times or the coming of a new age.  And yet they can be and are measured.  We just don’t bother to look because anecdotal memories during our lifetime are so much more real to us.

Another issue is when reason or science IS involved, and they fudge the data, or move the goalpost every time their predictions of how many hurricanes are a’comin’ are wrong.  Sound familiar?  If there was any truth to the countless climatological predictions more than five days out, we would already have been underwater or in an ice age years ago.   But they get away with it by forgiving percentage errors and constantly shifting their calendar instead of just ending it.

It is no coincidence that everyone from rapture preachers, New Age gurus, and environmental Gorons all agree that we live in profoundly defining times of urgency and change.  Why?  Because underneath it all, this phenomenon is not theology, or spirituality, or even science.  It’s psychology and sociology.  At best, it is a primal need for those things heavy aniticpation brings (the charge of fear and stress and closure), socially-spread by empathy and constant exposure to mass media.  It is mass hysteria at worst, hopefully not to the point of becoming a self-fulfilling prophesy where the world tears itself apart to prevent being torn apart.

But back to you.  If you believe some unexpected event or statistically provable result will come of 2012, put your money where your mouth is.  If it’s the end of the world, sign over all your possessions to me, going into effect January 1st, 2013.  Or if that’s too rich, a promise in writing that if the year comes and goes without such incident, you will never, EVER, fail to defer to someone else’s judgment on matters of import.  If you win, name your price, and I will never question your judgment again.

I’m willing to be embarassed by my confidence.  Are you?