The man who caused an uproar by [[2010 Quran-burning controversy|burning the Koran]] has been discovered preaching extensively from other Muslim scriptures.  The shocker?  He’s been doing it for years and no one noticed. 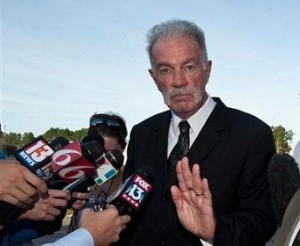 “Pastor” Terry Jones – Do his followers know he’s promoting the tenets of Islam? Image from QuranNews.Net

[[Dove_World_Outreach_Center#Biography_of_Pastor_Jones|Terry Jones]] and his wife run the [[Dove World Outreach Center]] in Gainesville, Florida.  They are best known for indirectly causing the deaths of UN Workers in Afghanistan.  What has NOT been reported is, despite his words and actions against the Islamic prophet Muhammad and his writings, he’s had a longstanding reverence for Islam’s lesser-known prophets and their doctrines.

Legitimate Christian groups Jones was formerly associated with have released him from leadership duties, rejecting his preachings, and claim he “didn’t project the biblical values and Christianity”.  One organization even had to close it’s doors and reopen under all new leadership.  Jones was fined for falsely using the title “Doctor” — his only degree is an honorary theology degree, and the unaccredited bestowing institution is disassociating themselves from him.  But no one will discuss the elephant in the room — his promotion of a violent, dark-ages theology and calling it Christian.  Although the Islamic practice of [[Taqiyya]] (lying) is strictly for hiding one’s faith during religious persecution, unresolved accusations against him for embezzlement, fraud, unpaid labor, and tax evasion may hint otherwise.

So who or what is his inspiration, if not the Gospel, and not Muhammad?

In the Muslim holy book the [[Tawrat]], we find the prophet [[Islamic view of Moses|Musa]], who laid down the foundation of laws that over time became local customs across the whole region.  This was the cultural predecessor of [[Sharia]], and dictated nearly every detail of people’s lives and relationships.  Claiming divine mandate, Musa raised an army from slaves that for generations genocidally slaughtered countless tribes across the Middle East.  He often commanded in the name of his deity that all men, women, and children were to be killed with no one spared, sometimes not even their animals.  The exception was for young virgins to be kept as wives or concubines for their own men.  One king from later in this period, [[Islamic view of Solomon|Suleiman]],  mentioned often in the Quran and revered by Muhammed for his wisdom,  was one of the greatest polygamists of all time.  Execution by stoning was common and an “eye for any eye, a tooth for a tooth” was unquestionable law.  It is no wonder that Jones was literally “telling congregants to beat their children with rods.”  This pre-Muhammad legal code is also where the taboo for all things related to pigs come from.

However, Jones’ focal preachings come from the teachings of Allah in the [[Injil]], as taught by the more recent prophet [[Isa]], who was tried and executed as a religious/political martyr.  His endictment included accusations of terrorist threats against the Jewish Temple in Jerusalem and fostering riots and uprisings. Though Isa publicly spoke of peace, he privately told his disciples to carry swords and even single-handedly terrorized a marketplace on holy ground during the locals’ religious holiday season.

Isa spoke mostly Aramaic, using a word similar to [[Allah]] to refer to a monotheistic god.  This word was then carried down into Arabic (and some other languages).  A likely inspiration for the eventual Islamic doctrine of “abrogation”, or [[Naskh (tafsir)]], was Isa’s claim that new revelations superseded old ones, even by other prophets such as Musa.  [[Saul of tarsus|One prominent follower of Isa]], also heavily quoted by Jones, was a known murderer of Christians.  Arrested many times during his travels, where his goal was to push his faith westward into Europe and eventually the whole world, he wrestled much of the power from Isa’s [[Simon Cephas|hand-chosen successor]].  This is similar to what transpired centuries later regarding Mohammed’s grandchildren, causing the original division between [[Shia]] and [[Sunni]].

Jones also has publicly mentioned more than once the Islamic figure [[Islamic views on Abraham|Ibrahim]], said to be the father of all Arabic peoples through a bastard son.  (According to Muslim tradition, Ibrahim nearly killed his legitimate son as a sacrifice to Allah.)

But this is not just words.  His actions have been decried by Christian pastors across the world, by American politicians, and by those who serve in the military — those who must pay the most for such Holy Wars.  Yet he insists  that he is merely being “Obedient”, or “submitting [himself]” to divine will.  Is this a nod to the literal definition of a Muslim?  Even his more “Christian” background smacks of Islamic influence, as talk of daily prayer, fasting, and alms giving are all central pillars of the Muslim faith.  Or is this just an easy cover for a darker obedience to hate and intolerance?

Christian, Muslim, both or neither, Terry Jones is truly a wolf in sheep’s clothing.