Libertarians: They’re Out There, They’re Growing, and They Vote

I’ve just finished reading a Cato Institute study: “The Libertarian Vote in the Age of Obama.” (Full disclosure: One of the authors is a friend). If the authors are right, independent voters who are fiscally conservative but socially tolerant are a key political group that politicians and pundits should pay more attention to. 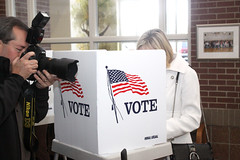 How large this voting bloc is as a fraction of registered voters is open to question. The gold standard of such things are poll results from American National Election Studies, or ANES. Based on post-election surveys of registered voters, ANES concludes that 14 percent of voters are best classified as libertarian: Fiscally conservative, socially tolerant, and in general favoring less government activity in both the economy and in people’s personal lives.

Gallup polls show larger numbers, about 20 percent of the electorate. Perhaps most interesting, a Zogby poll asked voters “Would you describe yourself as fiscally conservative and socially liberal?” A whopping 59 percent of respondents agreed. But when the question was modified to add the words “also known as libertarian,” 44 percent sill responded in the affirmative. Considering that the name recognition for the word “libertarian” is pretty small (most people still think liberal, moderate, and conservative cover all the possibilities) this was surprising.

So how then do libertarian voters vote? Most tend to be independent. Bothered equally by Democratic attempts to further expand the role of government in the economy and Republican meddling in people’s personal lives, they are not captive to either party. However, given that libertarian voters tend to be younger and therefore value economic issues more than social ones, they are more likely to vote Republican.

But their allegiance shouldn’t be taken for granted. In 2004, libertarian support for Bush dropped from 72 to 59 percent, and the Republican margin among libertarians dropped from 52 to 21 points. The study notes that given Bush’s soaring federal spending, the switch wasn’t surprising. Back in 2008, though, things swung back, with almost three quarters of libertarian voters supporting McCain. Given that McCain seldom talked about social issues and tried to at least portray himself as a fiscal conservative and a maverick, libertarian voters viewed him as a less objectionable alternative to the tax-and-spend Obama.

In what is perhaps the study’s most interesting idea, it suggests that libertarian voters function as “lead indicators” for what centrist, independent-minded voters will eventually do. The hypothesis is definitely intriguing, and supported by their data. In 2004, libertarian voters swung away from Bush, anticipating the Democratic victories in 2006. In 2008, libertarian voters voted against Obama, leading the study’s authors to conclude that they would lead independent voters against the Democrats, causing Democrats to “lose 2010 midterm elections they would otherwise win.”

Can you say Massachusetts Miracle? Scott Brown’s defeat of Martha Coakley, in the Massachusetts special election, occurred just days after the study was finished. Score a big one for the authors. Need I point out that Scott Brown is a pro-choice Republican who once posed for Cosmopolitan?

What does all this mean for the future? At the very least, independent voters who are fiscally conservative but socially liberal deserve to be taken more seriously by pundits, politicians, and pollsters. Even if the word “libertarian” is still struggling to gain traction, the combination of fiscal conservatism and social tolerance clearly resonates with some portion of the electorate. That portion is now large enough to affect the balance of power, and deserves to be more highly regarded by the chattering classes.

Sure, there aren’t as many of us as there are liberals or social conservatives, at least not yet. But we’re out there, we’re growing, we vote, and we matter. See what you can do to buy our loyalty. You might be pleasantly surprised.