Me? I Support the Savage

A deliberate mission. World-renown journalist Mona Eltahawy sprays a New York City subway poster with a can of pink spray paint.  What drove a member of the [[Forth Estate]] to break the “fourth wall” of her profession and take action against a public political message deemed by a court as free speech? 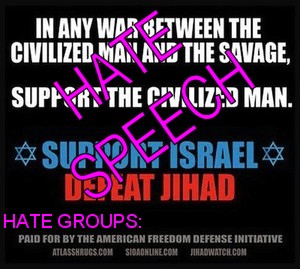 The poster quotes [[Ayn Rand]],  “In any war between the civilized man and the savage, support the civilized man”, and follows with “Support Israel, Defeat Jihad”.  Many of the posters have been defaced and labeled hate speech by Muslims and Interfaith groups among others.  Mona suffered arrest, and tweets with the hashtag #ProudSavage.

So what was the purpose of the poster? Whoever wrote it either doesn’t know that “[[Jihad]]” (“struggle”) isn’t the same as “jihadist” terrorism but is equally or predominantly a non-political religious term, or they are targeting the perceived enemy of Israel (“civilized men”) as Islam ( “savages”). But wait, we know who made the poster — bigot blogger Pamela Geller and the usual hate group suspects.  (In fact, it was an accomplice of Geller who oddly enough happened to be in the exact time and place to try and stop Eltahawy, and is now suing her for alleged damage to belongings she put in harms way of the spray.)

Who exactly is savage?

So who is Israel’s enemy, they who are called “savage”?  The Palestinians, ever beneath the Israeli regime’s boot, getting in the occasional ankle bite?  The other Arabic nations?  Islamic nations?  Or is there some delusion that only terrorists are against Israel?  Why use a religious term?  The answers are all there, in the websites of the hate groups that put their mark on the bottom of the posters.  And apparently they’re planning another round, decrying what they evilly deem “Islamic” attacks instead of “Islamist” attacks (if they even  know or care about the difference, or if the latter is even a more honest label).

And the hate speech isn’t simply using Israel as an excuse to demean a world faith — it merely confirms what I found in my research a while back — Zionism is the driving force in the propaganda war against Islam.  They openly make it clear that the posters are a counter-offensive to posters asking Americans not to support Israel.

So who is the savage?  Surely it is not civilized Israel, with their crisp military uniforms and institutionally organized atrocities and injustices.  It must be the other guy, far too primitive to have their own state-of-the-art air force or voting seat in the UN.  Their tactics are barbaric by comparison, more like the American Indians fighting European encroachment …

Oh wait, that’s where I heard the term “savages” before.  In the [[Age of Discovery]] (led by the “civilized” world, no less), people of Africa and Asia and the New World were culture-less, godless, backwards people.  We were compelled in Christian kindness to civilize them for their own good. Resisting the power of royal dominions crowned with mercantile gold only further demonstrated their pitiful ignorance.

The world was filled with [[Queequeg]]s, ripe for conquest, servitude, and education.

But “savages” was too politically incorrect by the mid 20th Century.  We had to estimate and brand others less worthy or subhuman on a more “scientific” basis.  The war films of a highly civilized America depicted the Japanese as closer to our simian cousins (ironically while allying with the Chinese, also “Mongoloid” by archaic taxonomies).  The even more civilized Germans took the highest road and simply decided some humans (them) were ABOVE others.  And they had nicer uniforms to match their high genetic civility.

So are we sure it’s not hate speech?

Today, in THIS Century, the plans of Geller, Horowitz, and similar Zionists, is to rid the world of Islam, period, with no distinctions or quarter for peaceful adherents or religious, non-political aspects.  This is no secret, and now the methodology shows its true face.  This “free speech” cultivates our collective prejudices and the belief the enemies of Israel (ALL of “Islam” according to the Zionists) is not worthy of consideration as fellow human beings.  Why?  This isn’t causal name-calling.  We are not supposed to see this as a conflict of different opinions or interests, but superior and inferior.  If we can accept “them” as something less, we can set up “resettlements” or “reservations” or “camps” without guilt, or at least give Israel absolution in its own heavy-handed efforts at [[Lebensraum]].

Pamela Geller’s bio on her site has a caption: “Evil is made possible by the sanction you give it. Withdraw your sanction.”

She wants your sanction.  She wants America’s sanction.  It’s time we be aware of it and refuse to fuel the hate and war that has brought us to this precipice.  And regardless of who the players are, we’ve seen what happens when the “civilized man” steps off.