Why I’ll Vote for Voter Supression

This really should be a two-parter.  I’m going to take a strong, unpopular (unpopulist?) stance on why not everyone should be allowed to vote.  But first, let’s look under the hood of the debate on voter ID.  I’m not sure who is dumber or less sincere on this issue, but let’s try to find out.

So basically we have a study that concludes voter fraud exists (however negligible), and there’s no study at all showing how many people cannot get a picture ID.  The difficulty or prohibition by cost by which someone can get a photo ID is an opinion; any study of voter fraud is an estimate based on how many people actually getting caught and/or are actually pursued and convicted.

The question is if voter fraud is greater than disenfranchisement (if it exists).  The answer is nothing but telling rhetoric that incriminates both parties.

What we DO know

One thing we do know is that Democrats openly see an ID requirement as targeting their own voter base.  But who are these people without ID they assume will vote Blue?  Illegals?  People too infirmed or broke to take a bus to get a $10 card (the current cost of a pack of cigarettes), yet somehow will find the motivation or strength to get to the polling place?  Did we already forget how [[ACORN]] was caught red-handed and it’s now a popular joke that dead people vote Democrat?  Even our own legislators are not immune to such unethical activity.

(I wont address the study showing fraud to be less than 1%, but I will point out an article in the local paper reported that almost all cases of social services fraud are not pursued.  We ought to be cautious when the incident of a crime is confused with the incidence of reported or sentenced offenses.) 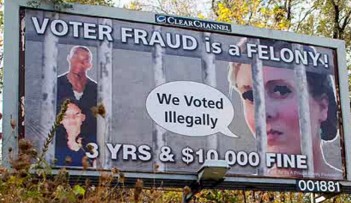 And if this isn’t reason to suspect those resistant to such measures to have an interest IN voter fraud, look at the reaction to billboards in Ohio warning people of the legal penalties of fraud.  Why would someone suggest a billboard warning of fines and jail for fraud discourage legitimate voters?  Isn’t that like saying the shoplifting prosecution signs in a store is telling customers they are not welcome?

The argument is that it is simply part of a larger Republican conspiracy to discourage the poor and minorities from voting — under the assumption they would vote Democrat.  The majority of billboards were allegedly placed in poor or minority neighborhoods after all — never mind it was probably cheaper to do so by whoever paid for them.

But let’s assume Republican’s agree (secretly) with the assumption that the poor and minorities will vote mostly Democrat and want them to stay home.  Let’s assume their intent is to cull the herd, at least of people too unambitious to get something as unarguably simple as a photo ID yet somehow want to vote.  Let’s even play the race card and call it an attempt to resurrect the [[Jim Crow laws]].  But let’s also understand that Democrats in the past have bribed homeless and poor people with cigarettes and free rides to the polling places.  Are they trying to be socially progressive and empower the downtrodden, or just buying into that rationalization without realizing it says something about the people who would vote for them and why? 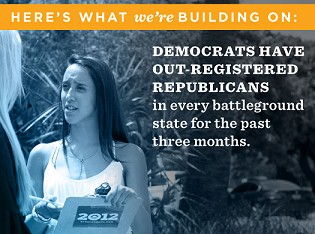 And they are proud of it in ways that reveal it is  really just scavenging votes.  In a recent [[Organizing for America]] newsletter, Team Blue boasts that they registered over 215,000 new voters, far more than Team Red.  These numbers are NOT in the context of enfranchising American citizens to do their patriotic duty, but in the context of having a better chance to beat Team Red.

Why do they assume the people they registered will vote for THEM, rather than just vote?  Isn’t their targeting of minorities and poor a bit less than altruistic, not to mention assumptive?  Romney believes some “47%” wont vote for him and gets slammed for it, yet the DNC seems to demonstrate a similar belief in their actions, and is implied in their accusations against their opponents.

Lining people up to register and shipping them to the voting booth who were too apathetic to do it themselves also says something about the quality of voters being targeted.

Therefore, I am suggesting the realistic possibility that “voter suppression” — a truth or a misnomer — is about stacking the deck any way each side can.  It’s a reasonable assumption I think.  But for the sake of argument, let’s assume those who are being registered or denied are not being used as pawns, and that this really is a matter of racism and classicism.  Of course it’s wrong.  But if the target was more objective, would it be?

Maybe we SHOULD restrict voting

I hate to admit it, but I watched “[[Repo Wars]]” the other day, a trivia game to save one’s car from being repossessed.  I also hate to admit I didn’t know all the answers, since they asked about music and sports teams.  But when I heard “contestants” say the pilgrims came over in a “battleship” and couldn’t identify “The Father of Our Country” except as “that little white boy” (not kidding), one thought came to mind: They probably vote, but absolutely, for-the-love-of-country, should not.

Never mind that the electoral system was put in place to protect us from collective stupidity, as is the whole representative system of government in general.  It is a simple truth that democratic process only works with an educated public.  And we wonder why we are in such bad shape.

Now I’ve heard a Democrat or two assert a dubious statistic that they are smarter and more educated as a whole than their Republican counterparts.  And yet they openly embrace a core base of people who statistically are NOT well educated.  This is not a slam against minorities or the poor.  This is a slam against our education system, and the passive-aggressive insistence that it’s better they be (bad) voters than actually fix the system of intellectual inequality.

I’m not saying we bring back a literacy test.  But what about the citizenship test?  You must be a citizen to vote and must pass the test to be naturalized, literate or not.  Why not make EVERYONE take the test (especially those to hold public office)?  How can it NOT be fair to have some standard above clinical retardation in allowing people to vote?  How is it sane to allow people who know nothing of basic American politics to have a say?  That’s like letting the children in a large family decide where they will all live and if they will even go to school.  It does not “empower” anyone.  It only allows the uneducated to be bought and sold by propaganda and handouts.

But we must be careful.  We must start ignoring lines of race, poverty, and especially voter preference likelihood.  But we cannot ignore the inability of some percentage of the population to be trusted with their own lives, let alone that of the rest of us.  No, this isn’t hyperbole.  Yes, you’ve see them out there in the streets — those people who you desperately hope do not have children or drive a car … or vote.

The citizenship test would be a good start.   A strenuous civil service examination for elected officials would be even better.  The tests could be developed in a bipartisan process.  They could be administered the same as in voting, accommodating the illiterate and those with special needs.  And it would force us to truly look at disparity in education rather than reinforce racial and socio-economic stereotypes.

And that, my fellow Americans, is why voter suppression is both taking us in the wrong direction, yet not going far enough.