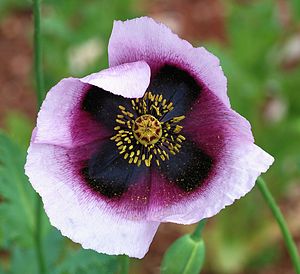 English: Opium Poppy flower showing a bud and a fruit in the background (Photo credit: Wikipedia)

Ten more Americans died this week in a senseless and pointless war in Afghanistan, fighting an enemy with allegedly supernatural powers that is impossible to kill. I’m talking about the opium poppy.

Three DEA agents and seven American servicemen lost their lives in a helicopter crash, returning from an unspecified military action against suspected narcotics traffickers. My heart goes out to their families and loved ones. But I’m glad I didn’t know them personally. If I did, it would be unforgivable of me to call their deaths tragic and unnecessary.

The war on drugs in Afghanistan is counterproductive, unwinnable, arrogant, superstitious and pointless. It wins allies for the Taliban and funnels monopoly profits right into their hands. It is a tragedy in every sense of the word, another miserable mile marker on the march of human folly.

The very idea of carrying on a war against a plant is sheer idiocy. Trying to extinguish something that is easy to produce and desperately wanted is effectively writing a check to organized crime. According to UN estimates the Taliban earn between $90 and $160 million a year from illegal heroin production. Much of that will be spent on killing Americans. How much would the Taliban get if opiates were legal?

Part of our enthusiasm for the drug war is based on a deeply human need: The desire to fight evil. The problem with this is that only people can be evil.

English: Map of Afghanistan showing the security situation by district and opium cultivation by province in the period 2007 to 2008. (Photo credit: Wikipedia)

We hear that opium is a “killer crop,” drugs “kill people,” and that’s why we’re fighting a “war on drugs.” But it’s ridiculous to believe that the opium poppy is evil. People can use it to do evil, but that is an enormous difference. And therein lies the problem. The war on drugs is a war on people. That is why it is not going as planned.

People are afraid to speak up about the drug war because they’re afraid of what others will think. If you say that prostitution should be legal, maybe it’s because you want to hire one. If you support gay rights, maybe you’re closeted. And if you support ending the drug war, you must be a druggie.

There are lots of reasons that well-adjusted, responsible citizens can want something to be legal without wanting to do it themselves. Don’t let anyone tell you otherwise.

Nor is there shame in admitting that a war is unwinnable, if that’s what the evidence says. According to the UN report issued last week, the Taliban are now earning more money from heroin than they did when they were in power. Our strategy of eradication merely won more farmers over to the insurgents’ cause.

Now we’re concentrating on distribution networks. This will not work either. According to the UN report, a typical Central Asian state will intercept about 5 percent of the opium leaving its borders, dropping to 2 percent by the time it reaches drug users in Europe. None of this will change. To believe otherwise, you’d have to be high.

[stextbox id=”alert”]Part of our enthusiasm for the drug war is based on a deeply human need: The desire to fight evil. The problem with this is that only people can be evil.[/stextbox]

I understand that opiates can be dangerous, addictive substances. I understand that legalization will not lead to a fantasy utopia where drug-related social costs will disappear. There is no magic wand Congress can wave that will eliminate poverty, ignorance, misery and desperation. The human search for chemically induced pleasure will always be with us.

I also freely admit that I do not know every detail of how opiate prohibition should be undone. But I and other advocates of repeal shouldn’t have to know all the answers. Repeal doesn’t have to be perfect to be better than what we have now. When it comes to the war on drugs, we need an exit strategy.

Yes, I’m angry. I am angry we are subsidizing the Taliban and winning converts for them. I am angry there are people who unthinkingly support the drug war because they believe they are fighting evil. I am angry that good men are dying in a pointless war that is accomplishing nothing but enriching America’s enemies.

These words are hard for me to write, knowing that just a few days ago good men disagreed with me and died for it.

I just don’t want there to be any more.